Marching us up to the top of the hill … After all the drama of the last seven days, this current European Council meeting – or "summit" as most of the hacks insist on calling it - is turning out to be one of the most phenomenal anti-climaxes of all time.

Apart from Brown getting a beaming grin from el presidente Barroso (left) and an adoring glance from Frau Merkel (below right), there is little of interest coming from it apart from a commitment to do absolutely nothing about Ireland (openly) until October.

The original "Plan B" – or is it C? – has proved to risky in the high intensity spotlight of media scrutiny and has been temporarily set aside. But the "colleagues" are still intent on ensuring that remaining states apart from Ireland complete their ratification. Then, at the October European Council, held under the French presidency, they will await a new proposal from the luckless Cowen. 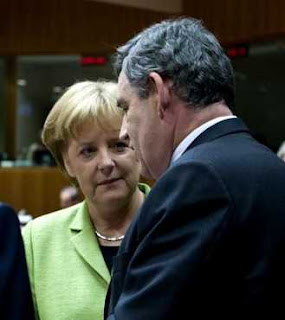 At that meeting he is expected to come up with a new plan for a referendum, with assurances this time that he is going to win it. Expect a revised question that, effectively, links a "no" vote with the threat of being expelled for the EU – or some such. Dates as early as November are being suggested, with March being the most commonly touted.

That said, The Irish Times has Ireland’s minister for foreign affairs, Micheal Martin, denying that there will be "solutions by October" – although he and his boss will be "exploring options and ideas." You can certainly bet on that.

Killing the idea of any confrontation, Martin confided in the media that he did not expect to get a hard time from his EU colleagues. "There is no question of us getting it in the neck; there never has been," he said, adding that there was an appreciation of the real politique of the position by our European partners. "Europe has been through things like this in the past," he declared.

The great plan, according to Martin – roughly the equivalent of turning water into wine - is to ensure that that the decision of the Irish people is "respected" while "equally respecting the right of the other member states to reach their own position on the treaty."

When the "colleagues" have finished respecting each other's positions, and sucking up to the loathesome Gordon, they will get down to the serious business of agreeing the pre-drafted Council communiqué. Then they will all toddle off home later today feeling mightily pleased with themselves. No one else will be any the wiser.

So the "colleagues" have marched us up to the top of the hill, and are now marching us down again.