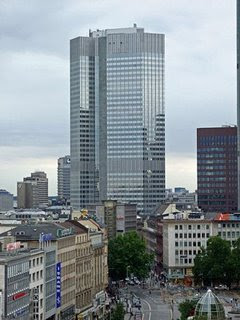 The last thing the global monetary system needs at the moment is a clash between the European Central Bank and the US Federal Reserve over strategy. Yet that, according to Ambrose Evans-Pritchard is precisely what it has got.

His source is a report by Morgan Stanley's European experts who are warning of serious strains in the global financial system that "could lead to a replay of Europe's exchange rate crisis in the 1990s". "We see striking similarities between the transatlantic tensions that built up in the early 1990s and those that are accumulating again today. The outcome of the 1992 deadlock was a major currency crisis and a recession in Europe," they say.

At the heart of all this is the starkly different priorities between the ECB and the Fed, the former still taking inflation as its exclusive concern, and thus holding up interest rate, "ignoring angry protests from politicians and squeals of pain from Europe's export industry." On the other hand the Fed, is responding to the "credit crunch" by trimming rates in order to promote economic growth.

That apart, Ambrose reminds us once again that the ECB policy is also creating considerable strains within the eurozone itself, badly affecting the vulnerable countries of the Club Med region and the euro-satellite states of Eastern Europe.

The point of maximum stress, he writes, could occur in coming months if the ECB carries out the threat this month by Jean-Claude Trichet to raise rates. It will be worse yet - for Europe - if the Fed backs away from expected tightening. "This could trigger another 'catastrophic' event," warns Morgan Stanley.

And it is here that Ambrose misses a trick – although, to be fair, it is not directly relevant to his article. Behind the scenes – as indeed Ambrose has recorded – there have been strenuous efforts by Sarkozy (and Chirac before him) to rein in the ECB and bring it under political control, thus enabling a change in policy to one more favourable to the Club Med members, of which France is a "founder" member.

And, as part of that French strategy, was a plan to use the constitutional Lisbon treaty to absorb the ECB into the EU as a fully-fledged Community institution, alongside the commission, subject to the aims and objectives of the EU. This we reported last August (twice) and, while it caused a frisson of concern at the time, the late inclusion of the ECB into the treaty has been largely forgotten.

However, this could explain the desperation of the French to see the Lisbon treaty ratified and then implemented. This is not "only" political. Since their very economic survival depends upon it, that could be their hidden agenda.