A "process of engagement" 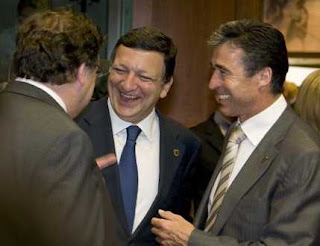 Despite the intense speculation on his intentions, Cowen is saying that he (and he alone, it seems) cannot speculate whether Ireland is to hold another referendum. He says he needs more time to make an analysis of the situation in Ireland, adding: "I have to get involved in a process of engagement."

This leaves Sarkozy in an interesting (in the Chinese sense) position. In his role as EU president, he is to visit Dublin next month, keen to avoid what is being called "the risk of contagion" – i.e., the Czech Republic following suit, declaring that, "Ireland is a problem. But if we had a second or a third problem, it would become very difficult to solve."

Re-emphasising that renegotiation "is out of the question", Sarkozy flatly states, "We are not going to redo a second simplified treaty."

However, from yet another photograph of the Council meeting, showing Cowen, Barroso and Danish prime minister Anders Fogh Rasmussen – all enjoying a jolly little jest – it seems that the Irish PM is not too worried about his country having created such havoc.