Where there is a will, there's a way 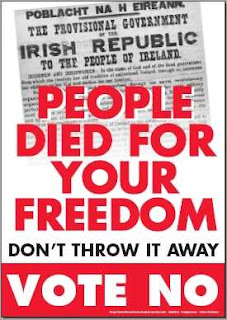 Confirming our prediction yesterday, Bruno Waterfield writes in The Daily Telegraph today that the "colleagues" in Brussels are indeed working on plans to ensure that the constitutional Lisbon treaty is still implemented elsewhere if Ireland votes against it in the referendum.

Bruno cites one of the "diplomat" figures which seem to haunt Brussels, who says that a "bridging mechanism" was being discussed. If Ireland rejects the treaty, it may simply be removed from the list of signatories and will not be legally obliged to abide by it.

Then, by late 2009 or early 2010, when Croatia joins the EU, an amending "Accession Treaty" will be signed by all members including Dublin. Incorporated into that would be a series of protocol texts giving paper "opt-outs" on controversial Irish EU issues, such as taxation powers or greater military co-operation.

Such texts would be similar to Britain's existing protocol opt-outs on the Charter of Fundamental Rights and social issues in the Lisbon Treaty text being ratified in Westminster.

And guess what. Ireland, like the rest of the Europe, does not hold referendums on EU enlargement treaties and with new protocol opt-outs Dublin may get a new Accession Treaty past the Irish parliament without a popular vote.

Meanwhile, Irish officials have held secret talks to implement the Lisbon Treaty regardless of any referendum on the text. During talks to create an EU diplomatic corps on 7 and 13 May, writes Bruno, Irish diplomats presented a position on the composition of the European External Action Service and role of the EU's new "foreign minister".

Secret minutes of the meetings show that Ireland's EU ambassador, Bobby McDonagh, pleaded with his colleagues to keep the talks and Dublin's position confidential. "[We] have to remain cautious in presenting these issues [referendum]!" the minutes record.

It seems the only thing that will stop these loathsome creatures is a stake through the heart – needing EU stakeholders of a rather different kind than the "colleagues" are used to.