"It is not your business!" 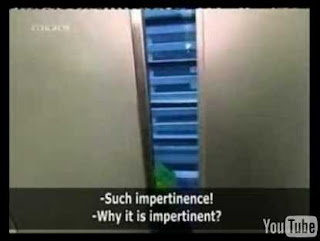 Bruno Waterfield adds some background to that delightful video on the pigs MEPs with their snouts in the trough signing their expenses register at 7 am to get their daily attendance allowances, even though they then rush off home.

We are told that the video, posted on You-Tube, was taken down from the European server, shortly after the link was sent to that arch-deacon of rectitude, Labour MEP Richard Corbett. We don't know how true that is, but it is one of those things that should be, even if it isn't. The video, however, is still on the US server, which is why it can be accessed from the link above.

What struck me was the sequence shortly after the introduction, when one MEP, asked if he was going to sign the register, retorts: "it is not your business!" There we have it – an elected representative, enriching himself from the public purse, who tells a member of the media that it is none of his business.

Equally instructive is the German Green MEP, Hiltrud Breyer, who crashes into the wall in her haste to get away from the cameras, then declaring the media attention as "impertinence" as she retreats behind the closing doors of the lift.

That really tells you all you need to know about the "project", especially when the commentator wryly comments that the film, "... clearly demonstrates how nervous some politicians become when they are being scrutinised, in particular their 'gravy train'".

Meanwhile, Bruno tells us in his paper that Giscard d'Estaing has been telling the Irish Times that Ireland's referendum rejection would not kill the Treaty, despite a legal requirement of unanimity from all the EU's 27 member states.

"We are evolving towards majority voting because if we stay with unanimity, we will do nothing," he says, effectively endorsing the view prevailing amongst the "colleagues" that referendums can be ignored.

This, of course, comes as absolutely no surprise, even if it coincides with the Austrian chancellor telling his people he'll seek a referendum over future changes to European Union treaties – but not this one. Is this not rather like the Conservative pledge?

However, we now live in a "post-democratic society" which means that, increasingly, as their lack of legitimacy becomes ever more apparent, our ruling classes will have to resort to ever more violence to force obedience. In the way of things, the people will eventually have to reciprocate, and so the spiral downwards will continue.

And one stepping stone on that path is "that video", which tells us, with crystal clarity what our political classes think of us - "it is not your business!"