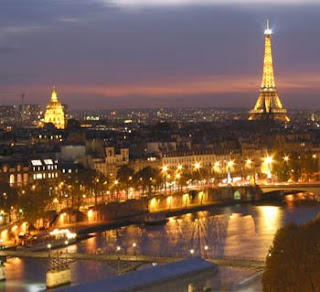 Well not all that prodigal really. There are certainly no expectations of fatted calves. While I’ve been away the boss seems to have got down to some serious work on what is wrong with the situation in Afghanistan. As our readers know, when he does serious work it is awesomely serious. So, the promised discussion on the future of the blog has been postponed again. Fear not. It will happen.

When I told the boss that I had no intention of writing about my trip to Paris, he expressed surprise and displeasure in equal measures. So, I feel I ought to put together a couple of paragraphs on the subject.

What can I say about Paris that will be of interest to our readers? It is, of course, as beautiful as ever and as much fun as ever if you are prepared to be adventurous – not too adventurous just a little bit. Which is of no interest to anyone.

However, a change noted since my last visit a few years ago is the paucity of European flags despite the approaching French Presidency of the EU. It used to be that every single official building – and there are very many of them – would fly the golden stars on the sky blue background next to the tricoleur. No longer. With very few exceptions they fly the tricoleur and nothing else. I wonder why.

Other good things to note: the transport is cheap, clean and efficient. The streets are clean. The people of Paris and their offspring appear to have no need to throw rubbish on the ground either on the streets or in the Metro. Very curious behaviour to those of us who are used to the filth of London and other English cities and towns. I wonder what’s behind it.

Parisians smoke a great deal though they are no longer allowed to do so inside public places. So they do it in the street or at the outside tables of cafes and restaurants. Curiously enough, the ban on interior smoking was introduced on January 1 of this year. Normally, these bans are introduced in the summer to acclimatize people by the time autumn and winter come round. The French government ignored such niceties and it seems to have worked, though, naturally enough the situation is different in the summer.

The people of Paris seem quite happy to sit in bars or cafes for a while, nursing a drink or two, then order food or go and eat somewhere else. They appear to have no need to drink until they are completely smashed and need to pass out or vomit on the streets or the Metro. Very odd. I wonder why they behave that way.

American tourists are back in large numbers despite the weakness of the dollar and the strength of the euro, not to mention the ever predicted American economic collapse. Perhaps, it is the people who have been saying consistently that the difficulties are there but the United States is a long way from an economic melt-down who are being proved right.

Paris is, apart from the transport, expensive and VAT is at 19.6%, which is no joke.

There are more bookshops, selling new or second-hand books, in every arrondissement than in the whole of London. Very few of them are chains.

There are, however, many difficulties that one can see or hear from people who live there. The country’s unemployment has been going down but much of that is because of the continuing exodus of economically active young and not so young people.

The problem of the banlieu has not gone away though President Sarkozy has set up a commission to investigate it and to come up with some solutions. Incidentally, I was told by several people that his marriage to Carla Bruni is probably the most popular thing he has done, which is not quite the way our journalists have been writing about it.

For all of that, you can go through much of Paris without ever realizing that a very large proportion of its population originates from North Africa. Jobs are still not available to the people from those housing estates and the whole situation remains fraught, though Parisians (and this was proved to me by at least one conversation I had with a born and bred Parisian) tend to have an out of sight out of mind attitude, until, one assumes, the riots start again, especially if they come closer to the centre.

History tells one that riots in the old working class or, before that, artisan class faubourgs, such as the Faubourg St Antoine or St Denis or St Martin have no effect until the people march into the centre and build barricades there. It may yet happen. Of course, one effect might be the odd slaughter by heavily armed police and other forces, as has happened before in Parisian history, but I think even the French government might find it hard to get away with that nowadays.
Posted by Helen at 22:34