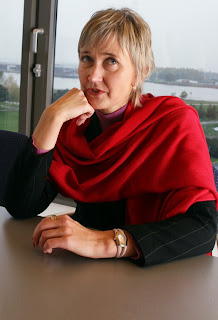 It is very good to know that Members of the Toy Parliament are undismayed by the fact that some of their financial shenanigans are being investigated. To be fair, only very few MEPs need to worry as investigations are by no means widespread. In the meantime, they carry on in their unceasing labours to watch over our wellbeing.

Tremble, oh ye bloggers. The European Parliament is debating whether there should be a control on bloggers with "malicious intent" or "hidden agenda". Well, we can relax. Our agenda is not hidden. We are full of malicious intent towards the European Union and all its many minions. I wonder if they mean us. Surely not.

The report that goes into this interesting story was drafted by Estonian Socialist Marianne Mikko and was approved of in the Culture Committee. It will now go to the full plenary. By "now" I mean some time in the nearish future and if it has to wait till after the next European elections, so be it. Reports and legislation in the EU do not go out of action just because there are those piffling events – elections.

Speaking about her report, Ms Mikko told us "the blogosphere has so far been a haven of good intentions and relatively honest dealing. However, with blogs becoming commonplace, less principled people will want to use them".

Asked if she considered bloggers to be "a threat", she said "we do not see the bloggers as a threat. They are in position, however, to considerably pollute cyberspace. We already have too much spam, misinformation and malicious intent in cyberspace". She added, "I think the public is still very trusting towards blogs, it is still seen as sincere. And it should remain sincere. For that we need a quality mark, a disclosure of who is really writing and why."

I find myself somewhat in agreement with Ms Mikko (if this continues I might have to consult a doctor). There are, indeed, bloggers out there who pollute the blogosphere with "too much spam, misinformation and malicious intent". Let me remind our readers of Fragrant Margot and her terminally boring blog. Should there not be a quality mark, a rather black one, awarded to this torrent of sludge?

There are other Commissars with blogs. (Incidentally, did you know that there is a Commissioner for Multilingualism? He doesn’t seem to have a blog. Perhaps he could not decide which language to write it in.) There are also blogs written by EU Representatives or, much more likely, by their talented staff, as the link above shows. For all I know there are blogs written by MEPs or their talented staff.

It seems perfectly obvious that none of these can qualify for that quality mark that Ms Mikko is yearning to issue. After all, they are not even bloggers but promoters of an official organization that, most definitely, has an agenda, though as it happens it is not hidden.

May I suggest another name for them? Clogs has already been taken or, rather, awarded by us to those corporate blogs written by journalists and politicians of many stripes that are hardly independent. So, what about comblogs as, no doubt, all these people are very communautaire. It has a satisfyingly corporatist sound.
Posted by Helen at 01:37