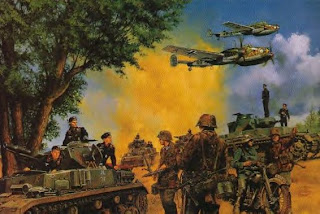 Today is the anniversary of the German attack on the Soviet Union in 1941 and I thought I'd interrupt the flow of the narrative on this blog by posting this rather curious image of Operation Barbarossa.

Of course, it was not Russia the Germans bombed at 4 am or drove their motorcycle and tanks across but, in the first place, eastern Poland that had been annexed by the Soviet Union a year an half previously.

Stalin, reportedly, refused to believe that his chum Hitler had let him down. Then he panicked and, it seems, the entire Politburo left Moscow, not to return till early July. The arming of Moscow's population was forbidden even when the Germans rolled across relentlessly, reaching the outskirts by early December. After all, it was not entirely certain on whom the people might turn their guns.

On July 3 Stalin made his first speech on radio and called the people of the Soviet Union not comarades but his brothers and sisters. That, naturally enough, induced real panic. Things must be bad, people reasoned.

In the end Montgomery's dictum of the three rules of war being not to invade Russia, repeated three times, turned out to be absolutely correct, though it took a long time and the losses were unspeakably high, not least because of Stalin's policies. Just one thing about that dictum: invading Russia from the west has never been a good idea, with the Poles being the most successful in the seventeenth century. Invading from the east, on the other hand, or the south-east worked very well in the past. Something to be pondered over.
Posted by Helen at 12:29