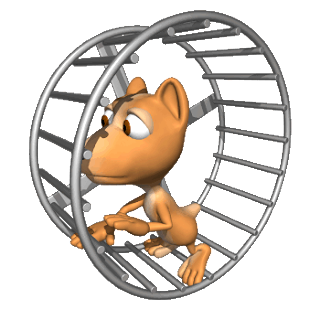 Like some poor demented creature on a treadmill, doomed to keep plodding on the same path, it appears that the Irish may, after all, be told to go away and vote again on the constitutional Lisbon treaty.

This is hard to believe, given all the recent pronouncements, but it is in The Daily Telegraph so it must be true.

Actually, the story is by Bruno Waterfield and he has a pretty good track record, unless his stories have been doctored by his gifted editors in London. He is saying that the "colleagues" are taking heart from an EU commission poll which indicates that many of those who voted "no" believed a new deal could be easily renegotiated - more detail here, plus Speigel.

Thus we are told, Dick Roche, Ireland's veteran Europe Minister, is hinting that his country will seek new guarantees before a second vote, in a re-run of the Nice treaty referendum in 2002.

Then, of course, the Irish people were presented with a rigged question on the back of some paper – entirely worthless – guarantees – and it looks like the "colleagues" think they can pull the same stunt again.

This seems to please our favourite Frenchman, Jean-Pierre Jouyet, who is already on record saying there can be "no renegotiation" of the treaty.

As long as the Irish can be dragooned into giving the "right" answer, Jouyet believes that the delay in complete ratification can be contained to about six months after the 1 January 2009 deadline, in good time for the Euro-Elections in mid June.

On that basis, the "colleagues" are already continuing with implementation, gathering nominations for the new, full-time EU president. Jouyet is entirely unrepentant, saying that, "I do not think that one can say that the Treaty of Lisbon is dead even if there is a delay to the ratification process as well as decisions, such as nominations, which arise from the implementation of this Treaty."

He adds: "We will return to the entering into force of the treaty of Lisbon as close as possible to the European elections."

The question is then, will the Irish fold, like they did in 2001, or will they finally call the bluff of this monster which simply does not know how to take "no" for an answer?

UPDATE: The Irish Times is reporting that the leaders of the two main Opposition parties have now said "they do not favour another referendum on the Lisbon Treaty with the same wording being put to the people again". However, Fine Gael leader Enda Kenny and Labour leader Eamon Gilmore "have not ruled out supporting another referendum if a different proposition is put to the voters".

What price the word of a politician?