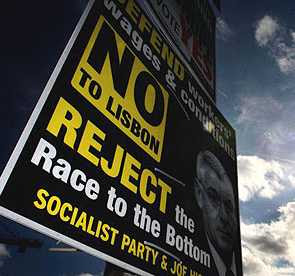 With the "noise level" extremely high, it is evident that the hacks are having trouble making sense of the European Council meeting. Headlines are all over the place, with different organs offering their own "takes" on the outcome.

The BBC, for example. homes in on the "Czech threat", noting that which is well known to readers of this blog that the Czech Republic may not be able to ratify the Lisbon Treaty until it has been cleared by the constitutional court.

Interestingly, here we get a quote from Czech prime minister Mirek Topolanek who says he was not going to try to halt the ratification process in his country, but adding: "I am not going to force MPs to back Lisbon and I wouldn't bet 100 crowns (£3, $6) on a Czech Yes." Klaus is still adamant that the Irish vote has killed off the treaty.

The Guardian focuses on David Miliband offering an "absolute guarantee" that the Lisbon treaty would not come into force unless it was accepted by the people of Ireland. He has rejected suggestions that Britain wanted Ireland to rerun its referendum in the hope of securing a "yes" vote and said there would be "no bamboozling or bulldozing" of Dublin as it considered its next move.

On the other hand, the Wall Street Journal takes as its main line that the Council has agreed that its member states should continue ratifying a key reform treaty, but has "delayed until October" decisions on how to overcome the document's rejection in an Irish referendum.

With some others, EU Business picks up on Sarkozy’s accusation that trade commissioner Peter Mandelson played a role in the treaty's Irish downfall. It also notes that the "summit" has been overshadowed by the Irish result, despite efforts to concentrate on food and fuel prices. 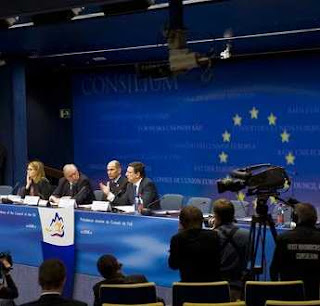 Altogether, then, we have much heat and very little light. The EU has now reverted to its all-too familiar trench warfare condition, where developments are going to take place behind the scenes, at a glacial pace, leaving the media confused and the nerds like us on this blog struggling to work out what is really going on.

Andrew Grice of The Independent pitches it perfectly, writing, "There is a fair amount of double-speak at these summits."

Here, he says, the other EU leaders insist they are not putting pressure on Ireland to overturn the "no" vote so the stalled treaty (which requires approval by all 27 countries) can be implemented. Yet behind the scenes they seem to be doing just that.

Thus does Grice continue: "The leaders say they are not setting a deadline for Ireland to chart a way out of the mess. Yet they have told the Irish Government to find one by the next EU summit in October. They say they are not demanding a second referendum yet privately are talking up one next year." That, dear readers, is the EU for you.

Meanwhile, there are fresh developments on the Wheeler case, with Judge David Richards in the High Court "instructing" the British government to delay its ratification of the treaty until he rules on Wheeler's judicial review.

Although the ratification Bill was given royal assent on Thursday, the treaty is not actually formally ratified until the government deposits its "instruments of ratification" with the Italian government. According to an FCO spokesman, this has not yet happened, the plan being to do so "within weeks".

Judge Richards intends to hand down his ruling next week, and has stated (full text here ): "The court is very surprised that the government apparently proposes to ratify while the claimant's (Wheeler) challenge to the decision not to hold a referendum on ratification is before the court," he said. He thus has invited the defendants (the government) "to stay their hand voluntarily until judgment."

As the judge has indicated, if this does not happen, Wheeler could apply for an injunction, and if the government is then in breach we could see Miliband hauled before the court. That would be fun.