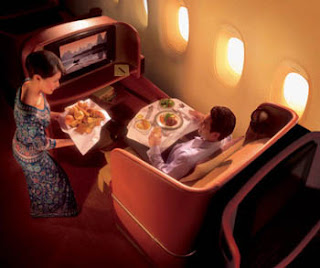 Strangely enough, it came up first on India Times and has since been picked up the The Daily Telegraph which, unlike the former, does not acknowledge the source - The Daily Mirror (no link).

Whatever the source, the information is the same: "Britain's defence bosses splashed out £730 million on meals, hotels and taxis, more than twice the bill for troop vehicles. While civil servants lived high on the hog using first and business class airlines, only £330 million was spent on defence vehicles, figures gained by the Mirror reveal."

That paper continues: "Last night the shocking contrast enraged relatives of soldiers who have died in Iraq and Afghanistan in ageing Snatch Land Rovers branded as death traps. The spending figures for 2005/6, the latest available, were only released after a Mirror Freedom of Information request."

They show £730 million spent on "hotels, restaurants and transportation" and £330 million on "motor vehicles and parts". Civil service expenses include first class train seats, business class flights and private taxis. Officials are also put up in leading hotels around the world. They can claim back all meals, including wine with dinner.

Much in the same genre comes another story from The Daily Mail (and others), retailing that: "Defence chiefs have come under fire for spending £2.5 million on new flags while troops are fighting abroad with outdated and inadequate equipment."

Undoubtedly, there are rational explanations to these stories, and calm analysis would probably show that much of the expenditure is both necessary and perfectly reasonable. But this less about "reason" than it is perception. And these types of stories simply reinforce a growing belief that our masters (and their servants) exist solely to rip off the taxpayer and live high off the hog at our expenses.

Of course, the rot starts at the top and until the politicians start addressing the perception as well as the reality that public service these days is simply an opportunity to raid the public purse, trust in government only has one way to go – and it ain't upwards.