Stitching up the deal 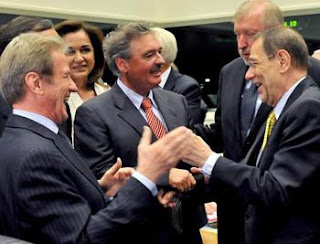 Inevitably, the media are going for the "theatre", with the Bloomberg press agency reporting that EU foreign ministers have "quarrelled over the fate of the bloc's new governing treaty after a veto in Ireland slammed the brakes on moves toward a more politically united Europe."

Nevertheless, the fiction must remain for general public consumption that EU ministers have "showcased their disagreements over how to respond to Ireland's rejection of the treaty." Thus, for the benefit of the hacks, Slovenia's Dimitrij Rupel is saying: "It would be risky to say that we are going to bring the treaty back to life when we face a blockade."

The real meat, however, comes from three foreign ministers from countries yet to ratify - Britain, Italy and Sweden. Each has obediently pledged to press on with the process, saying that their views shouldn't be denied by the Irish rejection. "We don't see any reason to abstain from having our voice just because they had their voice," says Swedish foreign minister Carl Bildt says.

Then we get Finnish foreign minister Alexander Stubb insisting that "the treaty is not dead," leaving the only dissenter, Czech president Vaclav Klaus, hailing the defeat of an "elitist artificial project." Behind his back, though, Sarkozy is meeting Czech prime minister Mirek Topolánek today – and that is where the real power lies.

Meanwhile, Open Europe and Policy Exchange have got together for a meeting this evening on the theme "The Irish no vote: what next?" Declan Ganley, leader of the Irish no campaign – who led it to "a stunning victory" – will look at how the "no" vote happened, what it means, and what should happen next.

By the time the meeting is over, it will already have happened. The "colleagues" in Luxembourg will have stitched up their deal. There has been no victory, stunning or otherwise.