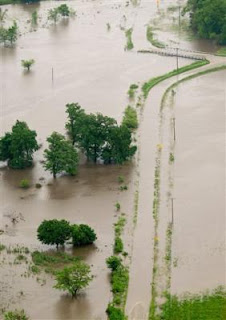 Lifting our heads briefly to look at broader horizons – before we get stuck in to the Irish referendum later today – we note that US midwest farmers are having a tough time.

Temperatures have been unseasonably low, there has been continuous rainfall and states such as Illinois have experienced the third wettest January-April since 1895. There has been widespread flooding.

The implications for world food stocks are dire, as crop yields are being marked down rapidly. For some farmers, harvest expectations may slashed by as much as 50 percent. Prices for corn (maize) and soyabeans are, as a result, soaring.

On the Chicago market, corn futures have risen seven days in a row, jumping nearly 20 percent since 3 June, ending at $7.09 a bushel for July. Soybean futures also rose to their highest level in more than three months, lifting to $15.365 a bushel, the highest since 5 March.

As we left it in May, the situation then looked touch and go, whence we observed that, "Everything depends on the weather – as it always does." So far, the weather has not been kind.

However, wheat prices are still giving some room for optimism, having recently slid back 17 cents to $8.51 a bushel, short of the nine dollar level some were predicting – and well short of the February peak of $13.50 a bushel. Rice futures for July are slightly up, currently at $20.05 per 100 pounds, but still significantly lower than its historic high of $24.46 in April.

Rice production in Burma is worrying though. It is expected to fall by 600,000 metric tons in the next season. The decline results both from a reduction in area and a drop in yield due to the damage from Cyclone Nargis that hit the country in early May. As Burma is a traditional exporter, this may intensify global pressures later in the year.

Meanwhile, the much needed rains to boost Australia's 2008/09 wheat crop have not materialised and, unless they come within the next few days, yield forecasts could be downgraded. While Australian Crop Forecasters are so far maintaining their predictions of a near record 26 million ton crop, actual production might now be considerably less.

Some are predicting a below average harvest: 5 million to 15 million tons of wheat available for export, compared with 17 million or 18 million tons in an average year.

Thus, hopes that increased global production might ease supply difficulties and check rampant commodity inflation are beginning to look forlorn – although it is still too early to press the panic button. But, on the UK domestic front - with oil prices also continuing upwards (although some reckon it is over valued by 40 percent) - it is looking increasingly unlikely that the embattled Gordon Brown can expect any relief from the inflationary pressures that are blighting his premiership,

And, if the flow of data pouring onto this site is any indication, things are going to get a lot worse before they get better. All the indications are that global cooling is taking hold – in which case "bad" is going to be very bad indeed. Mr Cameron might want to consider a rain check on winning the next election.