More on those Czechs 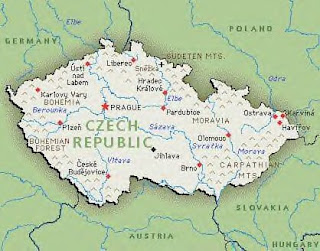 We have received the text of an interview President Vaclav Klaus gave to the Czech daily Lidove Novíni on Tuesday, June 17, which two days before that had analyzed the situation in the Czech government as far as the Constitutional Reform Lisbon Treaty was concerned and came to the conclusion that there was a split between the more cautious and "responsible" Prime Minister Topolanek and the less responsible (i.e. more outspoken) President.

This situation can result in a split of the senior ruling party. The question is whether Topolanek's ODS or Klaus's party will survive, Safarikova [political journalist] says.

Moreover, this internal party dispute about the visions of Klaus and Topolanek will significantly influence the Czech Republic's future course.

Topolanek has so far bet on responsibility. Klaus has not. What will the rest of the ODS, especially elected legislators, select? 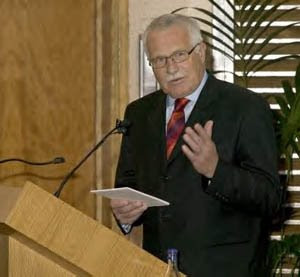 Meaningless political waffle and clever-dick stories appear not to be the sole preserve of the British media.

The same summary gives other opinions in the Czech Republic that seem outraged by the demand that the Irish referendum be run again.

In his interview on the 17th President Vaclav Klaus remained uncompromising:

What do you think about the Irish No?
The whole of Europe should thank the Irish people for slowing down current erroneous processes towards more unification, the suppression of nation states, towards a 'Europe of regions', and towards greater centralization from above of which the Lisbon Treaty was the embodiment. Thanks to the Irish referendum this was a perfect example of what the common people think about this development - contrary to the politicians supporting the EU who are motivated entirely differently. I thanked a few Irish people personally.

What does the Irish NO mean for the fate of the Lisbon Treaty in your view? What will be its impact for the entire EU?
I cannot imagine any other development besides recognizing the fact that this is not the way to go. Let's seek a different European model than a supranational state with its seat in Brussels. Let's come back to the community of friendly, effectively cooperating states. Let's keep most of the competencies on the level of states. We should let people living on the European continent be Czechs, Poles, Italians, Danes and not make Europeans of them. That is a wrong project. The difference between a Czech, a Pole, an Italian and a Dane (as random examples) and a European is like the difference between Czech, Polish, Danish and esperanto. "Europeanness" is esperanto; an artificial, dead language.

What follows from the Irish No for the Czech Republic? Should we continue in preparing the ratification under these circumstances, or is it not necessary? E.g. the British declared that they are going to continue in the ratification, despite the results in Ireland...
The ratification cannot be continued, the Treaty can no longer come into force. To continue as though nothing has happened, would be a pure hypocrisy. This would be worse news about the "state of the Union" than the Irish NO. The ratification of the Lisbon Treaty in the Czech Republic ended last Friday. To pretend something else is undignified - at least if we are in a world where one plus one equals two. I think that the British didn't declare anything. It was the Labour Prime Minister Gordon Brown who declared something. The British democracy is much more complex.

Does the Irish NO change your attitude towards the option of having a referendum on the Lisbon Treaty in the Czech Republic? And if so, how?
The referendum on the Lisbon Treaty in our country is not necessary today; there is nothing to vote on. The only possible question would be: "Do you, the Czechs, want the Irish to vote again and differently?". It is not about us today.

Should the European Union attempt to create an entirely new document after the Irish NO, instead of dusting the Treaty off or revising it?
Any document is only the last step. We need a new perception of the European integration process. It is necessary to explicitly repudiate the post-Maastricht development towards an ever closer union. The resulting document is then only a composition exercise, but it must be written on a different basis and by different people.

It cannot be written by a German politician who thinks in federalist terms and has been in the European Parliament for the past 30 years. It can neither be written by a Frenchman for whom "Europeanisation" is a way to increase the greatness and importance of France. It can neither be a representative of a country which wants to solve some of its historical traumas "via Europe".

It requires an unemotional consideration about the right administration of "public goods" - which of them belong at the level of towns, regions and states and which at the level of the continent. And above all, which of them do not belong anywhere, because the issue is not about public goods but about "private goods" which must remain subject to the decision-making of free individuals.

What will be the impact of the Irish decision on the Czech EU Presidency in 2009?
We will have a little more competences than we would, was the Lisbon Treaty valid. The Treaty substantially weakened the states and therefore also the presidency of any one of them. But let us not live in illusions. I know well, that the entire concept of a rotating presidency is to a certain extent just a game pretending to represent a real democracy.

Meanwhile, Prague Post reports Sarkozy’s visit to the Czech Republic immediately after the Irish debacle and his pleas that his hosts should act in the interests of the European project:

Sarkozy, however, called for more immediate and definitive action. "We cannot afford to plunge the EU into 10 years of institutional debate," he said. "Eighteen countries have ratified the treaty so far and others should go on with the process, while we try to find a solution to the problem ahead of us," he said. Sarkozy also stressed the fact that UK Prime Minister Gordon Brown promised to continue with the ratification process.

It seems that his Czech interlocutors had hardened their hearts to his Gallic charm with both Klaus and Topolanek refusing to agree to any decisions. That may have something to do with the fact that the Czech Constitutional Court has not yet pronounced on the Treaty though one cannot expect Sarko to understand that. The discussions also touched on bilateral relations between the two countries, which surely ought to be a thing of the past with the glorious European integration beckoning us to the bright future.

There was one slight embarrassment in the discussions, which indicated that preparations had not been particularly thorough:

Sarkozy had also been expected to present a bronze statue of Jan Palach — a Czech student who burnt himself to death on Wenceslas Square in 1969 to protest the Soviet-led invasion — as a gift to the Czech government expressing France's will to develop strong ties with "new Europe." The statue had been created in France by Hungarian sculptor András Beck a year after Palach’s death.

While the Czech Foreign Affairs Ministry expressed its gratitude for the offer, it suggested it would be better to keep it in France, as a copy is already on display at the Jan Palach High School in Prague and France is one of a few European countries that do not have Palach statues. The university town of Dijon, which has strong ties with Prague, is said to be a likely choice to house the statue, which could be unveiled there next year on the 40th anniversary of Palach's death.

Hmm. I can't help feeling that the Czechs came out the winners in that discussion. They politely rejected the present and equally politely reminded the French President that his country has not yet honoured Jan Palach. Should that not be rectified if France wants to take the role of Eastern Europe's special friend?

As other member states continue to ignore the legal position that was clearly expressed by Lord Neill of Bladen and Lord Kingsland, constitutional lawyers both, that the Treaty is now a dead duck and whatever happens later, it will be a different treaty, the Czechs have expressed their disappointment with Britain.

Britain, in President Klaus's opinion should not have pushed on with ratification of the Constitutional Reform Lisbon Treaty but led the way to the creation of a very different document. (We think a dissolution document would be in order and we do not really need President Klaus to write it, as he is offering to do.)
Posted by Helen at 16:27