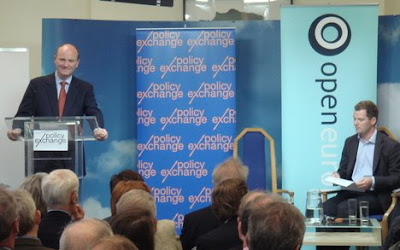 Interesting how, following the triumphal meeting arranged by Open Europe and Policy Exchange on the Irish "no" vote - featuring Declan Ganley – the only detailed report we get is from arch euophiliac Michael White in The Guardian.

Without that, all we seem to have is this (from which photo nicked – ta!).

Perhaps the real reason for the silence is that - as Mr White cannot resist telling us - Declan Ganley is most decidedly not a eurosceptic. Applause, it appears, was decidedly muted when, on several occasions, he told his less than enthusiastic audience that he was "an enthusiastic pro-European".