Disappointed but not surprised 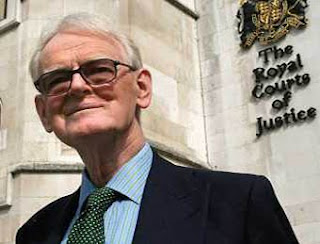 So, Stuart Wheeler has lost his battle in the High Court to prevent the ratification of the constitutional Lisbon treaty without a referendum.

Jonathan Sumption QC, appearing for the government, had argued that the case was "politics dressed up as law," while an important part of the government's case was that the Lisbon treaty is different from the previously-proposed European Constitution on which Tony Blair had promised a popular vote.

It seems that the judges agreed on the “politics” issue, declaring in respect of the promise of a referendum:

The subject-matter, nature and context of a promise of this kind place it in the realm of politics, not of the courts, and the question whether the government should be held to such a promise is a political rather than a legal matter. In particular, in this case the decision on the holding of a referendum lay with Parliament, and it was for Parliament to decide whether the government should be held to any promise previously made.

Interestingly, the Court also ruled on the comparison between the Lisbon treaty and the EU constitution as was, (see para 37 of the judgement), looking at "…the specific question [of] whether the differences are sufficiently material to warrant a different decision on the holding of a referendum."

"In this case the government has decided that they are," the two judges, Lord Justice Richards and Mr Justice Mackay, assert. “We doubt whether the correctness of such an assessment is a justiciable issue at all." They continue:

At best, it is a matter to be approached on a Wednesbury basis; and on that basis we are far from persuaded that the assessment is an unreasonable one. We reach that conclusion despite the fact that, on their face, the reasons originally given by the then Prime Minister for the holding of a referendum on the Constitutional Treaty (myths about Europe) are to a large extent capable of applying also to the Lisbon Treaty. There was still proper scope, in our judgement, for a different assessment in relation to the Lisbon Treaty.

This is the cruel reality of judicial review. It was once explained to me by a leading counsel, when I was engaged in proceedings of my own, that the government is entitled to make the wrong decision – as long as the proper procedures are followed. The quality of the decision cannot be challenged, only the means by which it was arrived at – that is the essence of the Wednesbury dictum.

The barrier then set is extremely high. In effect, I was told, the decision would have to be "barking mad" before a judge would be prepared to set it aside. If there as scope, as the judges have ruled here, for "a different assessment", then the benefit of doubt goes to the government.

Wheeler has been refused leave to appeal, but that does not end it. He can apply to the Appeal Court to have that refusal set-aside, thus allowing him to mount an appeal, and he has indicated that he intends to do just that. His chances of success are slender though, but you never know.