They didn't see it coming

One of the small mysteries of the Irish referendum is why, on the evening before the count, the bookmaker Paddy Power PLC paid out more than €180,000 in winning bets to people who wagered on a "yes" victory, with a spokeswoman for the company, Sharon McHugh, saying the company had decided a "yes" appeared the likely outcome.

What may have been overlooked, though - although it was reported on our forum - was an (unpublished) exit poll of unknown origin which forecast a victory for the "yes" side, giving them a 54-46 percent margin.

This may now have greater significance than we thought at the time, as the Irish Independent is running a story today, suggesting that the Dublin government simply did not see this coming.

Headed, "Cowen disaster: little authority and no leadership", with the strap, "'People were as mad as hell' and politicians didn't realise it", it tells us that the "people's protest … has plunged the Government, already beset by economic free fall, into its biggest political crisis in decades." It then adds: "The painful rejection of the Taoiseach Brian Cowen has focused attention on what is being described as the 'disconnect' between the political establishment and the people."

The general tenor of the piece is that the political establishment has remained "in a state of anger, but mainly confusion," with "former Labour leader", Pat Rabbitte, cited as saying: "A very great many people don't trust the political class. They are in a very cranky mood…" (an excellent analysis here from Hibernia Girl). 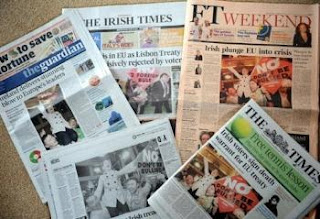 Much the same comes from the Irish Times which considers the referendum result "an unmitigated disaster" for the new Taoiseach. "The people have refused to accept his leadership on the most important issue facing the country," the paper says, venturing that: "Recovering from that blow to his prestige will be difficult, if not impossible."

Also pointed up is the "big difference" between the result of this referendum and the first one on the Nice Treaty, "which was also lost". On that occasion complacency led many of the "yes" voters to stay at home and the low turnout contributed to the defeat.

The Irish government then got a deal allowing it to add a declaration to the treaty stating Ireland's position. That enabled it to be put to the people again and the answer was "yes".

This time around the turnout was higher and there is clearly no silent majority lurking out there to vote "yes". The other part of the equation, says the paper, is that there is no one clear reason for the "no" vote and therefore no obvious declaration or protocol that could be attached to the treaty to enable it to be put to the people again.

All this makes you wonder what messages Cowen was giving his masters in Brussels before the result was declared, and what story he is telling them now. There seems to be no clear-cut narrative which the "colleagues" can run. 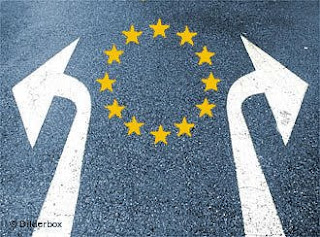 Certainly, the big blue machine in Brussels does not seem to be holding the line as well as one might expect. More particularly, Sarkozy – next holder of the EU presidency and the man who is going to have to "rescue" the treaty – does not seem to have rallied his own ministers behind a single, coherent "line".

Somewhat "off-message" is his own economy minister, Christine Lagarde. From Reuters via The Guardian she is conveying "strong hopes" that the European Union will soon have another treaty on reforms to replace one rejected by Irish voters.

The fact that Lagarde was speaking from a seminar on Asian integration in South Korea may have something to do with this. At that distance, she may be out of the loop. But it hardly helps the image of a co-ordinated front when she is telling reporters that she is "absolutely certain" there would be another Lisbon or some other agreement on reforms.

Even the German politicos seem to be fraying at the edges. Interior minister Wolfgang Schaeuble is reported by Deutsche Welle as calling for "more transparency" in the EU, also proposing direct election of the EU commission president.

Nevertheless, the general line is holding, with Schaeuble declaring: "Of course we have to take the Irish referendum seriously. But a few million Irish cannot decide on behalf of 495 million Europeans." Chillingly, he adds: "I am quite sure that we have a clear majority in favour of the continuation of the process of European unification."

This man should be on British TV. Phrases like "European unification" from the mouth of a German politician - one not known for his "liberal" tendencies - would have even the Europhiliacs running for cover. As it is, the focus remains on the Irish and, for the moment, their political classes seem all at sea.