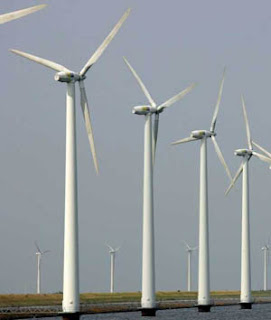 Having laboured long and hard, Part IV of the treatise is up on Defence of the Realm (spool down), with the fifth and final part half-written and due to go up later today.

That makes for the longest post we've ever put up on that site, a complete negation of the whole idea of blogging, which works best with short pieces, posted frequently. Thus, when it is finished, I'll turn it into a .pdf and upload it onto our server. I'll then clear the piece from the blog and leave behind a link for those who want to read the whole work.

As for the rest of the world, when in the grip of an obsession, it passes you by. Picked up from The Daily Mail though was a feature article having a go at wind farms, based on a report by energy analyst Tony Lodge. He concludes: "Greater reliance on wind power could lead to electricity supply disruptions if the wind does not blow, blows too hard or does not blow where wind farms are located."

However, we are told, the wind industry dismissed the criticisms: "The National Grid has said many times they can cope with the variability of wind," said Chris Tomlinson of the British Wind Energy Association. "Never in history has there not been wind blowing somewhere in the UK."

Err….. have they seen this?