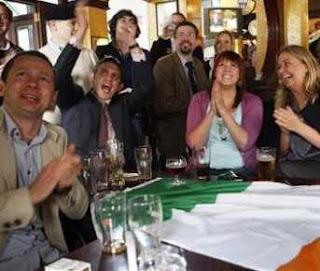 "Irish voters sign death warrant for EU's Lisbon treaty," says The Times headline, one of many of similar ilk in the flurry of coverage of the Irish referendum.

Of course, they have done no such thing. This is amply confirmed in an accompanying comment piece in the same paper from former Europe minister Denis McShane, headed "Ireland's no vote: Europe is not going away". But it is the strap line that gives the game away: "The people's decision will cause a mild headache. But things have not changed greatly".

McShane has got it in one, but if you needed any confirmation, Bruno Waterfield sets out "the plan" in The Daily Telegraph, echoing his earlier piece and ours.

This still does not stop The Times prattling about "Brussels' plans" being "in tatters", but even that newspaper has picked up some of the vibes, noting, "… some European leaders appeared determined to ignore the result."

Suspicions, it writes, "grew of a Franco-German plot to forge ahead and leave Ireland behind after Jean-Pierre Jouyet, the French Europe Minister, said: 'The most important thing is that the ratification process must continue in the other countries and then we shall see with the Irish what type of legal arrangement could be found.'"

Bruno spells it out, telling us that "European leaders were making plans to find a legal way around the Irish 'No' vote." Sarkozy is already working with EU leaders and diplomats to plan a special "legal arrangement" to bypass the referendum rejection.

This was always going to be the case and the first steps have already been unveiled. First and foremost, it was necessary to get an undertaking from all the member states which have not so far ratified the treaty to continue the process. The line, currently, is holding – especially as Gordon Brown has quickly affirmed that the UK will continue.

Any waverers and dissenters, like Vaclav Klaus, president of the Czech Republic, will quickly be silenced so that, by the end of next week, the European Council will be presenting a solid front in support of the treaty, with Irish premier, Brian Cowen leading the charge, declaring that the ratification process must go on.

After next week, the flurry of media attention will die down and, over the summer - away from the prying eyes of the hacks - the "colleagues" will be hard at work. They will be stitching up the "bridging instrument" which will enable the treaty to go ahead with 26 member states, with provision for the Irish quietly to re-enter the fold at a later stage. By October, it will all be done and dusted.

For the time being, though, the eurosceptics can enjoy their brief moment of triumph and, for sure, we have been given a strong propaganda victory. But, in reality, nothing has changed. The treaty is not dead – it is not even resting. The march of European political integration goes on unchecked. These fanatics will stop at nothing.