The people speak – sort of 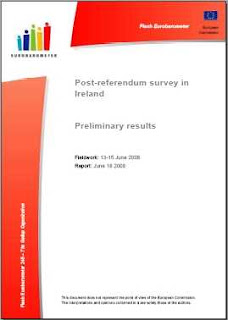 Over half of the people who did not vote in the Irish referendum complained of "a lack of understanding of the issues", and younger non-voters outnumbered their older counterparts by a ratio of two to one.

Presented with a number of possible reasons for not voting, many respondents said this was either due to a lack of knowledge (52 percent had not fully understood the issues, 42 percent had not been informed about the issues at stake and 37 percent felt they were not informed about the treaty content) or because the referendum was not important enough for them. Just under half – 45 percent – said they were too busy to vote and 38 percent had something more important to do than vote in the referendum.

These are some of the preliminary results of the survey of the Irish referendum, now published on the Eurobarometer site.

Of special significance is the motivation of voters in the two camps. For the "yes" voters, the prime motivation was the feeling that "Lisbon" was in Ireland's best interest, but the reasons mentioned were mostly "one-dimensional", centred around how Ireland has benefited from the EU. On the other hand, the "no" voters presented a "much wider diverse spectrum of reasons", but still a quarter complained of a "lack of information".

The "significant" supporters of the "no" campaign were young people, women and the unemployed. Professionals, managers and retirees were the main backers of the "yes" campaign.

Many of the "no" voters thought that the result would put Ireland in a strong position to renegotiate the treaty, to allow Ireland to maintain its neutrality and to keep its tax system (all backed by three-quarters of voters or more).

As to the campaign itself, a large majority of voters (68 percent) said the "no" campaign was the most convincing; even a majority of "yes" voters felt that way (57 percent). Yet, despite that, more people who voted "yes" had changed their minds during the campaign (25 percent of the "yes" and 17 percent of "no" voters started out from a different position).

These results are going to take some considerable digesting and there is still the final report to come. To some extent, they offer conflicting signals ("no" voters being more motivated, but more people switching to "yes" despite the better "no" campaign).

What does come out with absolute clarity, though, was that the inability to understand the text of the treaty was a considerable handicap to the "yes" campaign. However, how people would have voted, had they felt themselves better informed, is an unanswered question.