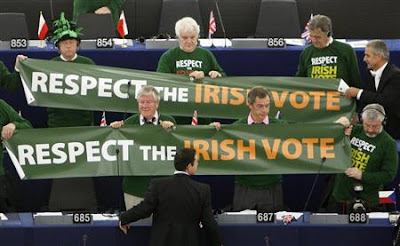 I'm back, after a glorious day in sunny Paris (outskirts thereof) to black news on the political and defence front (four troops killed in a "Snatch" Land Rover in Afghanistan). I will post on both in more detail later.

As a holding post, we record that our provincial parliament in Westminster yesterday completed ratification of the constitutional Lisbon treaty, the first country – as Reuters reports - to do so "since Irish voters plunged the bloc into turmoil by rejecting the treaty in a referendum".

The treaty passed through the House of Lords after their lordships rejected moves by Conservative peers to delay the ratification process because of the Irish "no" vote. The government then declared that the treaty would receive royal assent "later on Wednesday or early on Thursday", bringing it into law (but not into effect).

This is a wholly illegitimate act which robs this government itself of legitimacy. And no, we have not lost our country – but we are losing our own government as yet more of its powers are destined for transfer to Brussels.

Meanwhile, as the pic shows, another futile demonstration in the EU parliament – well meant and necessary and itself a symbol of our powerlessness, when the only thing left to do is indulge in impotent protest.

However, we will not remain impotent for ever. The "colleagues" are sowing the seeds of their own destruction, and increasing numbers of people now are more than willing to help them with that task. How ever long it takes, and no matter what it costs, they will not prevail.