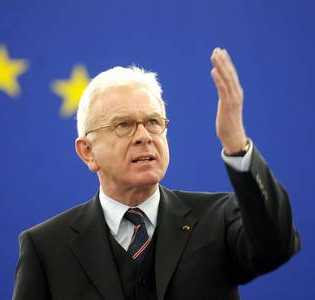 Hans-Gert Pöttering, the president (i.e., Führer) of the EU parliament has expressed regret at the "no" vote in the Irish referendum.

He calls on the European heads of state and government, meeting next week in Brussels, to discuss solutions in this situation.

In a press release, he thus declares:

It is of course a great disappointment for all those who wanted to achieve greater democracy, greater political effectiveness and greater clarity and transparency in decision-making in the European Union that the majority of the Irish could not be convinced of the need for these reforms of the European Union. We must not forget, however, that the European Union has experienced crises and times of difficulty several times before. Today, as in the past, we must keep a cool head.

We must now calmly reflect on how to proceed. The reform of the European Union is important for citizens, for democracy and transparency. Therefore I hope that it will be possible to find a solution so that reforms can come into force by the time of the European elections in June 2009.

This elicited a response from Gawain Towler, Press Officer of the Independence/Democracy Group. Short and sweet, he wrote: "Please explain to me, what part of "no" don't you understand? Yours sincerely …".

Me, I think they only have problems with two of the letters … "n" and "o". Put together, they are simply not in the EU vocabulary.