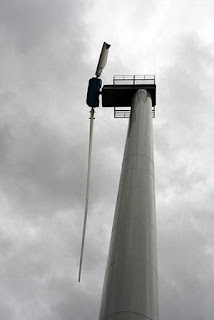 After our despairing commentary earlier this week, Booker returns to the fray with a vengeance in today's column, firing a 24-gun broadside against the wind farm madness.

This is the policy which that fool Gordon Brown launched on Thursday, calling it "the greatest revolution in our energy policy since the advent of nuclear power", estimated to cost us £100 billion or thereabouts for the luxury of having the lights go out.

Not least of the madness is that the intermittency of the wind means that we will need considerably more wind turbine capacity to reach the government's mythical figures than has been allowed for. According to Booker's calculations, to contribute 10GW which the system would have to produce would need 30GW of capacity. This would require up to twice as many turbines as ministers are talking about.

It is here that there is the great disconnect. To meet the target, we would have to erect new turbines at a rate of more than four every working day between now and 2020, two thirds of which would be offshore.

Yet, as Booker points out, there are only five of the giant crane barges and jack-up ships in the entire world that are capable of erecting the monster turbines that are proposed. Then, weather conditions are sufficiently favourable for them to operate only 50 percent of the time.

At upwards of £60 million each, they are required on station – weather permitting – for 24 to 36 hours to install foundations and a period of about 24 hours to erect each turbine. 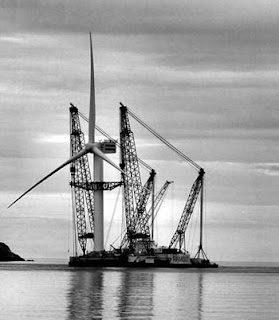 To satisfy UK demand – to include transit times, replenishment and refitting – we would need a fleet of upwards of 30, at a cost of £1.8 billion, for which no provision whatsoever has been made. Nor is it likely that any private sector business would risk the investment as the relatively short span of work would not be long enough to recoup the capital outlay.

Yet, in the massed ranks of the media and the political classes, not one of them seem to have cottoned on that the policy is not only mad, but unachievable. And this is only the half of it.

Another report in the Sunday Telegraph tells us that, "wind power would be too unreliable to meet Britain's electricity needs." Confirming what we already knew, wind patterns around the country mean turbines will fail to produce enough power at times of high demand.

As turbines often fail to produce enough electricity, dropping on occasion to 4 per cent of their maximum output, backup fossil fuel plants would need to be switched on and off to make up the shortfall in supplies - a highly inefficient process that would reduce any carbon savings from wind farms.

The report retails calculations based on wind speeds and electricity demand from the past six years to work out what impact 25 GW - about 16 percent of Britain's needs - would have had on the national grid if it had been supplied by wind farms. 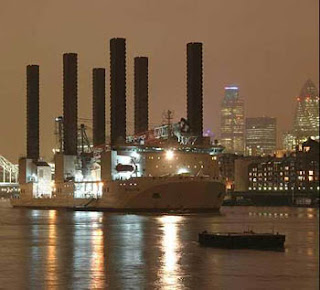 The results show wind is highly volatile. In January 2005, for example, wind speeds varied so much that demand on conventional plants would have varied from 5.5GW to 56GW. In that month, a 1,000MW fossil fuel plant would have had to come on and offline a total of 23 times to make up the shortfall. At 6pm on 2 February 2006 - the point of peak electricity demand for the whole year - wind farms would have been unable to provide any power at all.

Amazingly, the response of the British Wind Energy Association, representing the wind industry, is to lie. "All the research we are aware of shows wind farms produce electricity for something like 80 to 95 per cent of the time," a spokesman says. "When you look at the UK system as a whole, there is electricity coming from wind 100 percent of the time. There is no moment in time when the output of the pool falls to zero."

That, as we say, is a lie, in absolute and relative terms. Even when they are producing electricity in low wind conditions, the output is a fraction of the rated capacity.

What better a symbol of Mr Brown's broken policy, therefore, than the picture a the top of this post, a shattered turbine pictured two days ago in Sheffield University Advanced Manufacturing Research Centre, near the city's Parkway link to the M1.

The problem for us all though is that it is going to be Mr Cameron's government that is most likely to be implementing this policy, and he is just as entrapped in the madness as our current prime minister. In the fullness of time, when the lights do go out, he is going to have to stand at the despatch box, telling the nation what he is going to do. Like Nelson, I suspect that he will be saying, "I see no ships".