A symbol of subjugation 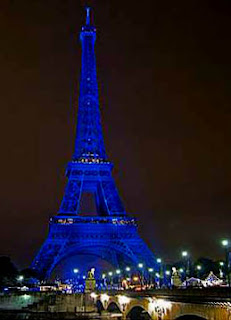 To mark the start of France's six month presidency of the EU, Sarkozy has ordered the Eiffel Tower to be lit up in blue with yellow stars, symbolising the EU flag. The "spectacle" is to last two months from 30 June, requiring eighty giant projectors on the ground and 100 more on the tower.

This contrasts with the tower's standard orange-gold night-time lighting, introduced on New Year's Eve in 1985. However, blue lighting to celebrate the EU has been used before. The Eiffel Tower was turned blue on 9 May 2006 (pictured), to mark the 20th celebration of Europe Day. On that occasion it did not boast the ring of stars.

How ordinary Parisians feel about this – much less Frenchmen – has not been recorded, but a few may understand the deeper symbolism.

Built between 1887 and 1889 as the entrance arch for the Exposition Universelle, a World Fair marking the centennial celebration of the French Revolution, the tower has a long association with national resistance.

By the early Twentieth Century, some years after it had supposed to be dismantled after its 20-year building permit had expired, it had become so useful for communication purposes that it was allowed to remain. The military used it in 1914 to dispatch Parisian taxis to the front line during the First Battle of the Marne, and it therefore became a victory statue of that battle.

During the Second World War, it acquired a new symbolism when, upon the Nazi occupation of Paris, in 1940, the lift cables were cut by the French so that Adolf Hitler would have to climb the steps to the summit. The parts to repair them were allegedly impossible to obtain because of the war.

Nazi soldiers had to climb to the top to hoist the swastika, but the flag was so large it blew away just a few hours later – much to the delight of the crowds - and had to be replaced by a smaller one. 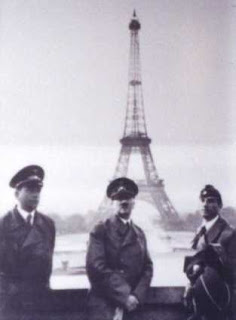 When visiting Paris, Hitler chose to stay on the ground, giving rise to the legend that Hitler had conquered France but not the Eiffel Tower. Then, in 1944, a Frenchman scaled the tower to hang the French flag. In the same year, when the city was liberated, the lifts were miraculously found to be working normally only hours after Allied troops had entered, thus cementing the reputation of the tower as a symbol of resistance.

It was for that very reason that, earlier, the Nazis had gone to such lengths to ensure their flag flew from the top of the tower. And, when Hitler came to the capital in 1940, telling Speer that, "It was the dream of my life to be permitted to see Paris," he made sure he was photographed against the background of the tower.

Now Sarkozy is following in the footsteps of Hitler by employing this symbol of France as the backdrop for the propaganda of an alien power, he is, perhaps unwittingly, acknowledging his own subjugation.