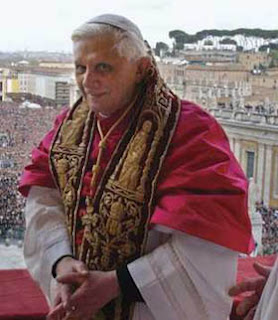 We thought we'd try our hand at a lurid Sun-type headline, if only to contrast with the BBC effort: "Pope hails Irish role in Europe".

This is in response to an obvious – if coded - attempt to influence the Irish referendum, the pope having timed a speech about the role of Ireland in European history to coincide with the eve of the Lisbon referendum.

Pope Benedict, we are told, used his weekly audience to praise the central role of Irish missionaries in European history. He eulogised the role of St Columbanus, an Irish monk born in 543 who travelled to Europe to spread Christianity – lauding him as "an early advocate of European unity", saying that he could be called a "European saint".

While the Pope did not directly urge a "yes" vote in Ireland, his meaning was absolutely clear and "church sources" are saying that the timing of his speech would not have been accidental.

The talk is that the pope is close to the Catholic archbishop of Dublin Diarmaid Martin, who is "likely to have briefed the Vatican on the referendum". The BBC is cautious about admitting that this inspired the pope's about Irish missionaries' historic role in Europe - just as the country's people determine the future shape of Europe in the referendum – saying that it "is probably a Vatican decision likely to remain behind closed doors".

Seems the Vatican and the EU have a lot in common.