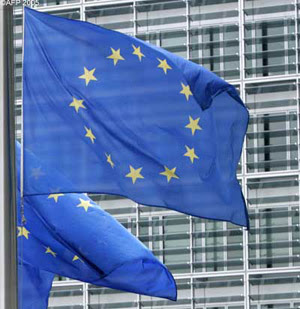 We had plenty of evidence that, prior to the Irish referendum, and more generally until the constitutional Lisbon treaty was ratified, the "colleagues" were keeping a low profile.

Had the Irish voted the "right" way, we could have been assured that the tempo of EU activities would have increased or, at least, become more visible. But, with the "Irish question" still in the balance, and the "colleagues" struggling to work out what to do next, the lid has been clamped down tight on publicity and new initiatives.

We are very much back to the situation where the EU commission, in particular, has donned its cloak of invisibility. Comment has virtually dried up and EU-related news emanating from Brussels is down to a bare minimum.

However, in the commentary front, there is still the occasional aftershock, such as the one from Anatole Kaletsky in The Times, rather appropriately headed: "The Ireland 'no' vote: a big earthquake".

Despite the protestations of the European elites, Kaletsky says, the vote changes the whole future of the EU. The British media and political classes lost all interest in the Irish "no" vote within days of this astonishing event, our man adds – and indeed they did. That itself was astonishing – although it should not have been.

But Kaletsky does think the word "astonishing" is a fair adjective to describe the Irish "no" vote – "this overwhelming democratic reaction to the political direction of Europe, by three million people who have risen, in a single generation, from penury to become the Continent's wealthiest nation, as a direct result of joining the EU".

Such "ingratitude" by the Irish people towards the European political elites may strike us in Britain as perfectly natural, since it corresponds so closely to the way most people here feel. Moreover, all three of our main political parties seem to believe they have a mutual interest in treating this as a case of "small earthquake, not many hurt".

In continental capitals, by contrast, the Irish "no" is seen as a tectonic shift that could transform the landscape of Europe for decades to come. Certainly the Irish "no" has triggered much more intense debate from Brussels, Berlin and Paris to Prague, Warsaw and Moscow than it has in London.

The continental interpretation is likely to prove more prescient than the studied indifference of the Westminster Village. First, The "no" vote presents Europe with a deeply embarrassing political dilemma.

At the very least, the Irish vote, Kaletsky opines, "will deprive the EU's continuing political development of all democratic legitimacy. Anyone who claims that the EU has any interest in reducing its 'democratic deficit' will in future be laughed at." We are then told:

However European leaders respond, the Irish "no" will be seen as a historic confirmation of the anti-democratic nature of the EU project. If the EU political project is now abandoned, it will be a testament to its repeated rejection by voters across Europe. And if the project continues despite the Irish objection, it will be final proof that EU leaders don't care what voters think.

Kaletsky continues in this vein, eventually coming to the conclusion that a bullying the Irish voters into changing their minds would result not in Ireland's expulsion, but in the break-up of the EU.

That is not a price that either the Germans or the French would pay for the right to have a president of Europe, he says. "So time is on the side of the Irish in their dispute with the Euro-federalist bullies. All the Irish have to do is stick to their guns and keep talking. Luckily the Irish are good at both."

It's a view – and the few left on this planet that are still interested in this subject could have a good argument about it. But, for the moment, the EU is not going to fuel that debate. When it comes to omerta it could teach the Mafia a thing or two.

When is it going to break cover?