There is a parallel 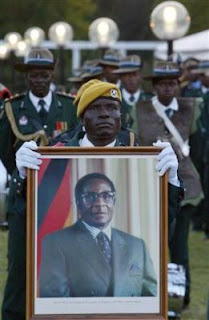 Robert Mugabe's Zimbabwe election victory was "an exercise in power-grabbing" which is impossible to recognise, the European Commission said Monday, calling on the African Union to seek a political solution.

"It is not possible to recognise the legitimacy of the result of this election given the conditions in which this second round took place," EU development commissioner Louis Michel said in a statement. "This victory has simply been an exercise in power-grabbing and is far from the spirit of change and renaissance currently seen across Africa," he added.

And no, not in a million years can the situation in EU member states be compared with the horrors of what is going on in Zimbabwe. But, in principle, there is no difference between the "exercise in power-grabbing" represented by the European élites ramming through their constitutional Lisbon treaty and Mugabe's action.

Come to think of it though, there is a practical difference. At least Mugabe went through the charade of having an election.