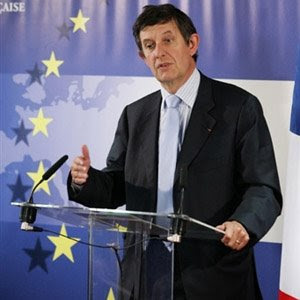 The EU must not embark on drafting a new treaty. This is the view of Jean-Pierre Jouyet, France's Europe minister - via the BBC - delivered to the French senate prior to France assuming the presidency.

Not that anybody thought differently – although some commentators have suggested it – Jouyet is adamant on this point. Whatever else happens in the aftermath of the Irish vote, "One thing is certain,” he says, “we won't start drafting a new treaty."

"Europe didn't come to a halt on 13 June," he adds, then delivering the coup de grace to those who had hoped the "no" vote might put a spoke in the wheel of European integration.

"We cannot allow ourselves to delay decisions... which can be dealt with independently of institutional matters," says Jouyet, demonstrating once and for all his grasp of the finer points of democracy.

But then this is the man whose response to the Irish victory was: “The most important thing is that the ratification process must continue in the other countries and then we shall see with the Irish what type of legal arrangement could be found."

It seems the new slogan for the French presidency will be: "Lisbon or bust".