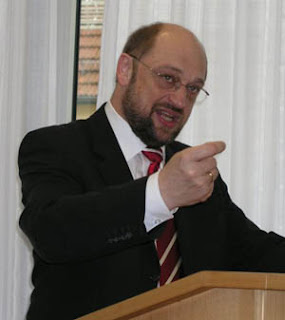 Hailed as the face of democracy in the European Union, the EU parliament has rejected the idea of allowing the Irish to renegotiate the constitutional Lisbon treaty, and has told member states to get on with ratifying the treaty.

According to Reuters, particularly vocal has been German social democrat MEP, Martin Schulz – once famously described as a concentration camp guard by Berlusconi, now leader of the parliament's socialist group. True to his reputation, Schultz ridiculed the idea of attaching protocols to the treaty to reassure Ireland that its interests are protected. "We would be a laughing stock at the end of the day," said the man. "Nothing that is being criticised about the treaty is in the treaty."

Equally uncompromising was Joseph Daul, leader of the European People's Party - of which the Conservatives are members. "I would call for all EU states to continue with ratification," he declared.

Also pitching in was Daniel Cohn-Bendit, co-leader of the Green Party: "If we have 26 countries having ratified, then the Irish will be obliged to give answers on what they want to do," he said. "Countries could not have their cake and eat it by pocketing the benefits of Europe without Europe," he added, complaining that the Irish political elites had failed to take the referendum seriously: "Essentially, the Irish people were considered stupid. The Irish felt something was hidden from them and nothing was hidden at all."

Britain's Lib-dim, Graham Watson, also lacked kind words for the Irish government. They had failed to explain the benefits of EU membership to citizens and were too slow to act on concerns such as rising oil and food prices. "The first lesson we have learned is that every government every single day has to be making the case for Europe and not just wait for a treaty to be signed."

England Expects gives an insight into the mindset of these people – beyond parody, he says.