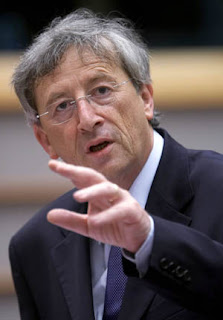 It is all the fault of member state government leaders, who "tarnish the EU image in their countries". They are responsible for "negative results" in EU referendums.

That, at least, is the view of Luxembourg prime minister Jean-Claude Juncker who claims that, "Politicians give the impression that Europe is being built against their will."

Thus, says Juncker, when it comes to European Council meetings, you get governments which "always try to explain in their countries that they have won against Europe."

He reads newspaper articles in several languages following the Councils and argues that the "aggressive language" used is "better suited to football matches". Furthermore, he insists that such reports are in fact very far away from the reality. "Sometimes," he says, "I feel like I haven't been in the [same] meeting room."

We almost certainly saw some of this recently when the Bloomberg press agency had members of the General Affairs council quarrelling "over the fate of the bloc's new governing treaty after a veto in Ireland slammed the brakes on moves toward a more politically united Europe." 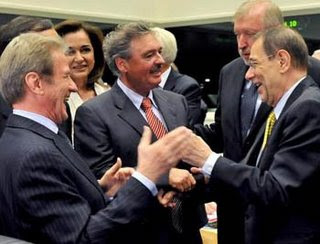 Yet, the extensive official photographic record shows nothing but conviviality (example left) and, while the is undoubtedly some acrimony (the final summit of the Nice treaty IGC is an example), most often the "colleagues" are rarely at odds.

Part of the phenomenon on which Juncker remarks is more to do with the media than the politicians. The hacks invariably want to present EU meetings in theatrical terms, talking up "conflict" and "disagreements" in order to liven up reports of what are mostly crushingly tedious events.

Much of then what goes on the record is massively distorted, aided and abetted by individual politicians who never miss an opportunity to grandstand, and who know that bland, neutral comments rarely attract media coverage.

Oddly enough though, there is another phenomenon to which Juncker does not allude. This is the "elephant in the room" syndrome, about which we have complained so often. When – as it so often does, - the EU messes up, the media coverage is usually distressingly slight.

Thus – as always – Juncker is looking at just one part of a complex issue. In truth, if the EU got all the coverage it "deserved", Mr Jucker would be even less happy than he is at the moment.