Are they thinking what he is thinking? 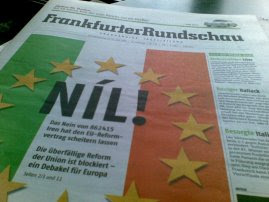 A fascinating piece in the Irish Independent suggests that the Irish government need not, after all, have held a referendum on the constitutional Lisbon treaty.

This is from Charles Lysaght, a former adviser on European law at the Department of Foreign Affairs, who argues that the government would have been better off taking its chances with ratification, leaving it to the objectors to challenge their action in the courts if they wanted to have a referendum.

The background to "that referendum", it seems, is cloaked in more than a little bit of mystery, starting during the debates in the Dail on the proposed amendment of the constitution that was put to the people in the recent referendum.

It was then that Fine Gael MP, Tom Hayes, asked why it was necessary to amend the constitution in order to ratify the treaty – whence the only explanation that he got from government spokesmen was that the Attorney General said so.

Writes Lysaght, it would have been interesting to know the exact advice of the Attorney General, in particular, whether it went further than expressing doubts as to the constitutional validity of ratification without a covering referendum.

Why this might be significant rests with the original judgement in 1987 of the Supreme Court on a previous amending treaty. Then, Chief Justice Thomas Finlay stated that the authorisation given to the State to join the European Communities (as the European Union was then described) was also an authorisation to join in amendments of treaties "so long as such amendments did not alter the essential scope or objectives of the communities".

Thus, Lysaght thinks that it was at least arguable that the amendments to the treaties of the European Union in the constitutional Lisbon treaty fell within this description. He offers some legal background to support his argument and also notes that the decision of the Supreme Court - which was reached by a narrow majority of three to two overruling a unanimous High Court judgement of a three-judge High Court - has been much criticised and would probably not be followed in a future case.

It is all uncertain legal ground, adds Lysaght, also asserting that the political ground offered no certainty. It is on this basis that he believes the government would have done better to proceed to ratification of the Lisbon treaty and left it to the objectors to challenge their action in the courts.

Now here is a thought. If the "colleagues" are able to come to an agreement with Mr Cowen about a number of (non binding) declarations which appeared to settle issues raised by the "no" campaign, could the Irish government then argue that a second referendum was not necessary in order to ratify the treaty? If they are thinking what Lysaght is thinking, they might be mad enough to try it.

And if then challenged in the Supreme Court, what then?