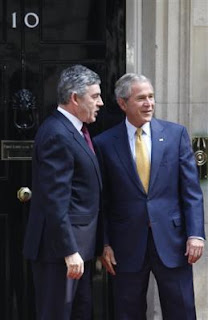 It is nice of George W to drop into Downing Street to have a chat with Gordon – our current (and last) prime minister. And how apposite it is that, while the two Gs pose at the front door, David Miliband is sneaking out the back (metaphorically), off to Luxembourg for the next act in the process of transferring our central government to Brussels.

While he is here, GW is – we are told – talking to Gordon about progress in the world trade talks. But he really should not be wasting his time. World trade issues are an EU competence so, if George wants to discuss progress he would be better off popping over to Brussels to talk to the organ grinders rather than the monkey.

Over term, that is what will happen more and more frequently. Once the constitutional Lisbon treaty is in force, the primary role of a British prime minister will be his membership of the European Council, where all the important decisions are made.

US officials will gradually realise that power has moved from London (and other member state capitals) to Brussels. In decades to come, US presidents will see no more sense in visiting Downing Street than, in the past, there would have been any value in a British prime minister dropping in on the state governor of Colorado to discuss US policy.

In effect, therefore, this is not only Bush's last visit here. It is also the last time a US president will visit a prime minister of Britain. The next president will be meeting a provincial governor.