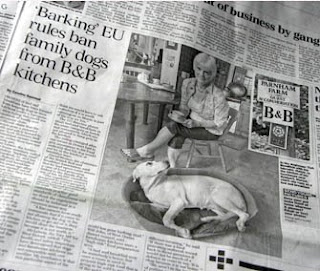 Occupying nearly a third of a page, prime space in The Daily Telegraph today (but also picked up by The Times - with a comment piece - The Express and The Daily Mail) is the ultimate non-story, a classic example of the cheap "Euro-myth" beloved of ignorant hacks and their editors.

"Dog ban means hundreds of B&Bs face closure," shrieks the headline in The Telegraph, heralding a wodge of drivel by Caroline Gammell telling us that, "Owners of bed and breakfasts have been banned from keeping dogs in their kitchens under a European Union ruling that could see hundreds of family-run businesses close."

Then we get the "human interest" bit, featuring an aggrieved "Tish Bowditch with her labrador, Maisie, in the kitchen of her farmhouse near Bridport, Dorset, which she runs as a bed and breakfast". This allows us to be told that, "Officials claim that the animals pose a potential health and safety hazard to guests' food."

Now we get the counterpoint: "However, bed and breakfast owners vowed to close rather than turn out the family pet. Oliver Letwin, the former shadow home secretary, called the legislation 'barking mad'."

So there we have it: the aggrieved Tish Bowditch, the winsome Maisie, the "barking mad" directive and the staunch, concerned MP standing up for common sense. But it is all garbage.

B&Bs are in the business of selling food. Like it or not, this means that their kitchens are legally classified as "food rooms". Food hygiene law has always applied to them and, since time immemorial, animals (including pets) have been banned from them. That was the case with the Food Hygiene (General) Regulations 1970 and the preceding regulations – long before we joined the "Common Market".

Nevertheless, that does not stop us getting another 500 words of fatuous, ill-informed sob story, as the myth is developed, complete with a statement from David Weston, the chairman of the British Bed and Breakfast Association. He is allowed to say, "…we think the regulations should be enforced in a common sense way."

Er … yes. Most often they are. In my former life, I was one of those inspectors who was charged with enforcing this law. It wasn't just B&Bs. Pubs were a particular problem. They always seemed to have dogs and, in pursuit of income, the missus would start up food sales, using the domestic kitchen … with the dog in the corner.

One thing that came in particularly useful in this respect was my own affliction with migraine. Fortunately, I do not suffer from the crippling headaches, as long as I am quick with the pills, but what I do get is loss of peripheral vision, so bad that you can only see things when you are looking at them directly.

It really is quite interesting how many times an attack came on just as I was looking at the kitchens. Dog? What dog? Never saw one, guv!

Two points emerge here. First, the brain dead MP, Oliver Letwin. Giving a classic "renta-mouth" response to this non-story, he betrays the usual predilection for self-publicity combined with an abysmal lack of knowledge of the very laws his parliament supposedly approved. He could of course have checked before opening his mouth, but that would have entailed a bit of work. Far better to shoot from the hip, than miss getting his name in the paper.

Then there is the "opportunity cost". The Lords had their debate about the constitutional Lisbon treaty yesterday. It gets a tiny mention in The Telegraph, added as a footnote to another story. Yet the paper has room for this sort of garbage, as do the others.

We really do deserve better from our newspapers.