The perception of great events 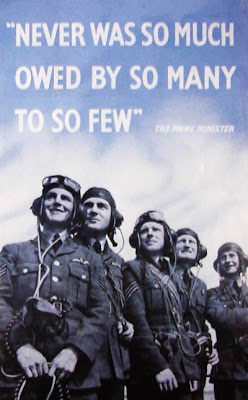 Autonomous Mind directs me to a superb ad hominem attack in response to his recent post, allowing me, just for once, to cap him by referring to a lengthy forum thread, largely devoted to personal attacks, directed at me as author of The Many Not The Few.

Some of the most vitriolic condemnation comes from another author, Andy Saunders, a man to whom I bear no malice and who has written some tolerably good books in his time, not least Convoy Peewit 1940: The First Day of the Battle of Britain , which I have referenced in my own work.

Yet it is Saunders, without having read The Many (and nor could he as it does not become available until next week), condemns it as "utter tosh", describing me as "the chief bunkum-monger", at the same time imperiously declaring that he has, "no interest or intention of entering into e-mail communication with North". (Not Dr North … but "North").

With others declaring that the book "sounds like complete attention seeking rubbish", not for the first time does it strike me that there is a parallel between the Battle of Britain and the obsession with climate change.

In particular, in Saunders's extreme and personalised response is so similar in demeanour to AM's critic that one immediately looks for commonalities, and indeed there is one of considerable relevance: they are both defending their respective orthodoxies.

In Saunders's case, this is evidenced by his long post, defending the central tenet of the Battle of Britain mythology – that Fighter Command won the battle - which rests on three points: one, Hitler intended to invade Britain; that, successfully to invade the island, air superiority was required; and that Fighter Command deprived the Germans of that air superiority, thereby preventing the invasion.

He and others take particular offence to my suggestion that Hitler had no great desire to invade and thus conquer Britain (but merely wanted to secure his western flank, paving the way for his invasion of Russia), and that the invasion threat was, by and large, a huge bluff.

In support of his argument that the invasion was intended, Saunders calls in aid Führer Directive No. 17, issued on 1 August 1940: "In order to establish the necessary conditions for the final conquest of England". This is seen as proof positive that Hitler intended to invade, that that necessarily, but for the intervention of Fighter Command, the invasion would have taken palace, with the subsequent defeat of Britain.

Without dwelling too long on issues dealt with at length in my book, one can take note of another book, which I am currently reading: The Politics of Nonviolent Action by Gene Sharp, a useful addition to the library of any would-be revolutionary.

Sharp tells us that, "An error frequently made by students of politics is to view political decisions, events and problems in isolation from the society in which they exist". And, whether Saunders can cope with it or not, Hitler issuing that directive was a political decision, and one aimed at achieving a political effect. That effect was not the defeat of Britain, per se, but to neutralise, by whatever means, the nation as a combatant.

Herein lies my challenge to the orthodoxy, and at two levels. On the German side, there was neither any real intention to invade Britain, nor, when push came to shove, was there the technical or military capability to do so. On the British side, there was never any real expectation in the higher echelons of government that an invasion could succeed – or that Britain could lose the war.

Interestingly, reading Liddell Hart's The Defence of Britain, first published in July 1939, one finds that he declares that the first responsibility of the Army is to protect of the country – by defending it from attack from without. Yet, he then says, "The risk of sea-borne invasion by a foreign enemy has become so slight under modern conditions as to be almost negligible".

That remained the prevailing view in 1940, and was one that was shared by Churchill, who doubted whether an invasion would be carried out and, if it was, that it could be successful.

On 12 July 1940, however, Churchill was to confide with Generals Paget and Auchinleck that "the great invasion scare" was serving a most useful purpose. It was well on its way "to providing us with the finest offensive army we have ever possessed and it is keeping every man and woman tuned to a high pitch of readiness".

Despite having doubts as to whether it was a "serious menace", he intended to give precisely the opposite impression in a forthcoming broadcast, talking about "long and dangerous vigils, etc.". The threat was to be exploited as a unifying and motivational force, the classic scare technique that we see used today on climate change issues.

But what is often forgotten by war historians – and almost always left out of Battle of Britain narratives – is that Churchill spoke not only as a war leader, but also as a Conservative prime minister, and one who had ambitions of leading the country after the war, which was then generally expected to come to an end around 1942.

No better can this be seen than in his famous "The Few" speech on 20 August when, as I note on the Days of Glory blog (and in the book), Churchill rejects out of hand the calls for a declaration of war aims, not least by as demanded by J B Priestley.

We see then the Daily Mirror question this rejection, but my recent review of Reynolds News brings this even further into focus. In the first edition after the speech, on 25 August, H N Brailsford, in his weekly column, observed that there were "two passages in this fine speech that call for some discussion".

These were the passages where Churchill rejected the idea of declaring war aims as "premature", with Brailsford observing that, while our hope of victory depended in part "… on our ability to win superiority in the air, and to create a powerful mechanised army", in order to convince the Europeans to lay down their rifles: "We must convince them that our victory will mean a better life for them, at once and in the future". Brailsford went on:


Victory is as much a political as a military problem. The forging of an appeal requires as much preparation as the manufacture of our airplanes, and the time to begin this is today. But it cannot be done until our peace aims are precisely announced.

Mr Churchill, he wrote, "has the temperament to lead in such a war, but has he yet begun to think out its strategy?".

This piece was matched by another alongside it, written by the anonymous Cameronian, who asked: "But why does Winston, master of our loyalty as well as our Mr Attleee, refuse to state our war aims? In his magnificent speech, he held out deliberately to the German and Austrian people the hope of 'food, freedom and peace'. Why then deny them the answers to the question: What kind of peace, what quality of freedom?"

In a rhetorical flourish, answering his own question with, "I can only guess", Cameronian went on to declare, "The sooner we tell the world precisely where we stand, the sooner we shall rally our friends everywhere under the flag of liberation".

Strengthening thus was a division which was to dominate domestic politics, characterised on the one side by demands for war aims and, from Churchill, a stubborn refusal even to consider them.

The reason for Churchill's obduracy is not hard to find. The sub-text of the "war aims" demand was for the creation of a socialist Britain, and all that went with it, including nationalisation of the means of production. That was what Churchill was also fighting against – the enemy within, the socialists who sought to label the conflict the "People's War".

His was an elitist vision of Britain, based on three pillars: Empire, King and Country, and it was interesting to see in the same edition of Reynolds News in which Brailsford held forth, a large government advertisement, urging people to buy War Bonds to support "our airmen", the advert itself displaying in bold type the now famous quote from Churchill's speech: "Never in the field of human conflict …".

"The Few", therefore – even then – were part of the domestic political battle. The reference was as much an attempt to shape the political perception of the battle, which as Clausewitz tells us was "a continuation of political intercourse, with the addition of other means". The élite "few" coming to the rescue of an embattled population was much more in tune with Churchill's idea of how the war should be seen. The people could not be allowed to be authors of their own salvation. That way lay the curse of socialism.

And this is what the guardians of the Battle of Britain orthodoxy cannot deal with – that the battle was as much (if not more) a political event (at many levels) as it was a physical battle between young men in their flying machines.

For them, the "intrusion" of politics is felt in some way to sully the purity of this battle. For me, though, it makes it that much more interesting, and more relevant to today, illustrating as it does, how the public perception of great events can be shaped.