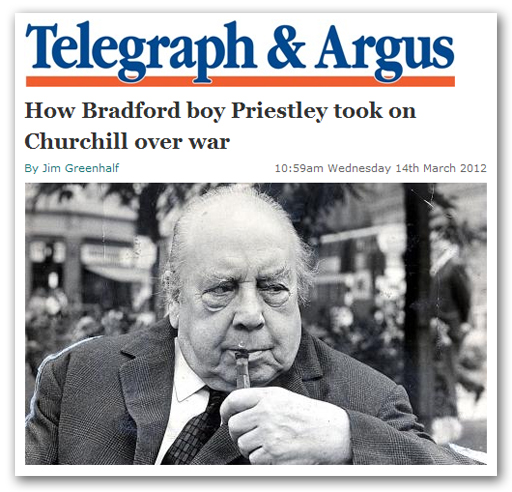 To my delight, our local paper has picked up on the Many Not The Few. The piece, written by Jim Greenhalf, who has already blogged his views on the book, takes a very local perspective, looking a "Bradford boy" J B Priestley, and my comments on his role as a political broadcaster during the war.

That he was, in fact, a towering figure, a rival to Winston Churchill, has largely been forgotten. It is a classic example of how even prominent figures can be airbrushed out of history.

Yet, in my view, through the dark hours of 1940, it was Priestley – with a combined audience of over 14 million through his weekly broadcasts and newspaper articles – who helped shape political opinion to such an extent that he paved the way for the Labour victory in the 1945 general election.

While Churchill was ready to appeal to the past, urging support for the three pillars of the establishment, Empire, King and Country, Priestley's message was more down-to-earth and direct.

For example, in his broadcast on July 14, 1940 – four days after what was subsequently defined as the official start of the Battle of Britain - Priestley told the BBC's Home Service listeners: "We're not fighting to restore the past – it was the past which brought us to this heavy hour – but we are fighting to...create a noble future for all our species".

The following Sunday he spoke again of the need to go forward "and really plan and build up a nobler world...in which ordinary, decent folk can not only find justice and security but beauty and delight". This, he said, "is our real war aim".

On the record, Churchill adamantly refused to specify his war aims, other than in the broadest terms of defeating the Nazis, on 20 August during his "Few" speech rejecting out of hand calls for him to make a statement. 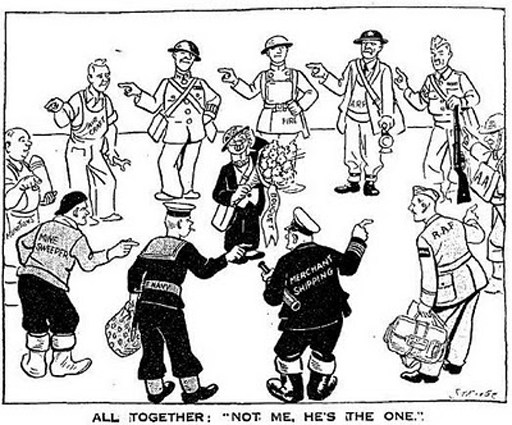 Effectively rejecting Priestley's agenda, this drew adverse comment in the left-wing press, including the The Daily Mirror. It even brought an implied rebuke from "George" Strube in the Express political cartoon (above).

He depicted his trademark "little man" holding a large bunch of flowers, labelled "bouquet". Surrounded by a circle of eleven men, each in different guises – from airman to anti-aircraft gunner and ARP warden – he was puzzling who to give it to. And well he might. Each man was pointing his neighbour. So much for “the few” – here was a graphic depiction of the many.

Most voluble was the Reynolds News, continuing a controversy that was to grumble on until the general election. Ignored by most contemporary writers, these articles - and many more – underlined the fact that Churchill was not only engaged in a shooting war against the Germans but also a domestic political battle, which he was subsequently to lose.

However, as Jim notes in his piece, Churchill won the war of words, as he had to. And even though he lost the 1945 General Election, he was back in 10 Downing Street in 1951. On Battle of Britain Day that year he broadcast to the nation from the BBC.

"Had it not been for those young men whose daring and devotion cast a glittering shield between us and our foe, we should none of us be sitting at rest in our homes this Sunday evening, as members of an unconquered and, as we believe, unconquerable nation".

"His triumph was complete", writes Jim – but it was a victory based on a myth that Churchill himself had a hand in making. Recovering our history from the grip of this myth is the task I set myself.

In the epilogue, I wrote that the Battle of Britain was a victory of the people of Britain – in fact Priestley's people more than they were Churchill's people. They were the ones who endured a most grievous and terrifying assault, held fast and survived, without tearing down their government and crying for peace.

But, as we have seen, over the years, credit for that most important victory has been stolen from them. They have been recast as supplicants and passive beneficiaries, rather than active collaborators in their own salvation.

To restore that history, I say, is to change the way we think about ourselves. We are part of a nation which, in time of great peril, rallied and by collective endeavour engineered its own salvation. That makes us a different people from the passive, shadowy inhabitants of a myth – and all the more powerful. What we could do once, we can do again.

We not only can do it, but we need to do it. That is why we need to look through the myths of the past and rediscover ourselves. More than anything, we need to rediscover our own power, when confronted with what Boiling Frog reminds us is often the real enemy – our own government.