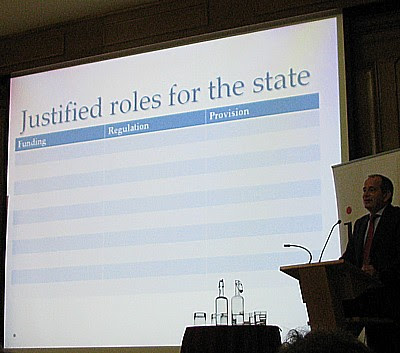 Having offshored most of Britain's governmental powers, some to Brussels and others to amorphous, anonymous groups such as the Bank of International Settlements, there is so little left of public policy-making in the UK that the elites are driven ever-more to micro-managing an increasingly limited spectrum.

So emerged the "schools 'n' hospitals" meme, as the only two issues of any substance over which British politicians still had any influence – issues which have dominated successive elections. And so it is that today The Boy returns to the Failygraph to write about – you guessed it - schools 'n' hospitals.

It may only be me, of course, but all I see is a leaden text, oozing with smug, patronising clichés, chains of meaningless words which do nothing but parody themselves and their author.

But what is so insidious is the way the debate is being closed down. The Boy speaks glibly of "choice", but only in terms of a limited set of "public services", which he wants to be "truly accountable to local people, not to politicians or bureaucrats in Whitehall".

Yet, when it comes to government itself, the state apparatus of which he is part, we have no choice at all as to who runs it. Our supreme government lies in Brussels, its officials unelected, unaccountable and unresponsive.

Thus, the deal is that we can chose our doctors, and even the hospitals in which we are treated, or the schools in which our offspring are educated, but we are not allowed to chose our own government – or define the policies and issues which it should regard as important.

Cameron may think that that is a good deal, one that can keep the majority of the population quiescent. And he may be right in that estimation. But he is not right in thinking that getting "schools 'n' hospitals" right (if that ever happens) is adequate compensation for the loss of our freedoms and independence.

What then stick in the craw is the deceit. "Nearly two years on from coming into office, brick by brick, edifice by edifice, we are slowly dismantling the big-state structures we inherited from the last government", says The Boy. But he is not. "We are putting people in control, giving them the choices and chances that they get in almost every other area of life", says The Boy. But he is not – not where it matters.

This is the man, Raedwald says, who can't tell the difference between freedom and choosing which prison in which to be confined. And that's what matters.