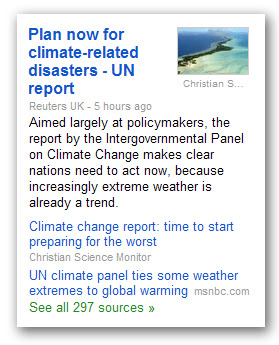 Dutifully, Reuters reports on the latest IPCC production – this one on: "Managing the risks of extreme events and disasters to advance climate change adaptation".

It tells us that nations "need to act now" on climate change, because increasingly extreme weather is already a trend. The need for action, it is thus asserted, has become more acute as a growing human population puts more people and more assets in the path of disaster, raising economic risk.

Conveniently, Asia is most vulnerable to potential disasters, with East Asia and the Pacific facing the highest adaptation costs – which sets them up nicely to receive the funds pouring into the pot, which is really all this is about.

But when it comes to public interest, or the scale of the media event, the figure for "sources" tells you what you need to know. With hardly any "big name" newspapers on the list, this tells you that the issue is effectively dead. A high-profile issue, where the media is really excited in the topic, will get anywhere between 2-4,000 sources. This story gets a mere 297.

But the regulatory half-life is what really matters now. As we have observed before, this is what is going to do the damage, as the political classes and the interest groups reap their rewards for a successful scare. The evidence builds, though, that as a scare, "climate" is dying the death.

The public barely cares any more.