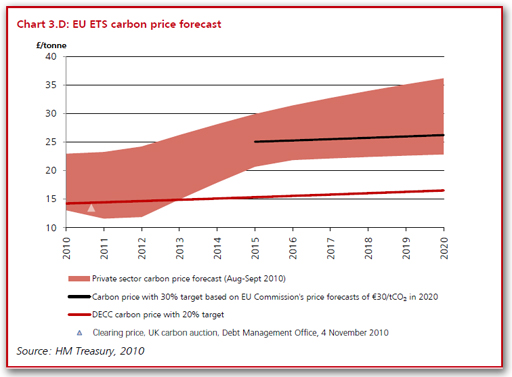 You can tell it's close to budget time. Sundry organisations, capitalising on the PR opportunities, are making their pitches in the hope of gaining headlines in the MSM. One winner in these PR stakes is Which?, magazine of the Consumers' Association, which is calling for the abolition of the carbon floor price, introduced in the last budget.

The magazine says this will cost the nation £278 million in additions to household electricity bills, in the first year of operation. Unfortunately, it does not show its working out, although the text of its release indicates that it is relying on government figures.

The crucial figure in this is the actual market price for carbon permits, and the Treasury estimate is based on a base price rising gently from £15 a ton in 2012 to about £17 per ton in 2020. On that basis, the costs are reckoned to reach £1.4 billion by 2015/16, with at least 40 percent of that being paid by households, a total cost of £560 million.

However, as The Guardian recently attests, these figures are based on foundations of sand. Against the Treasury estimate of £15 per ton, the carbon price plummeted to £8.80 in early February. On the face of it, this actually brings the excess tax far closer to Booker's estimate of £3 billion, raising total electricity costs by 18 percent or more.

As individuals, there is very little we can do directly in response to higher bills (apart from die of hypothermia), but industry can respond to an additional £1.8 billion to its costs – by shipping out and finding a less taxing environment. This, we have already seen with aluminium and other metal production, and the trend can only get worse.

With this extra tax applying only the UK, we have a double handicap – the EU and our own administration. Against that, industry really has only one choice, to get out and stay as far away as possible.