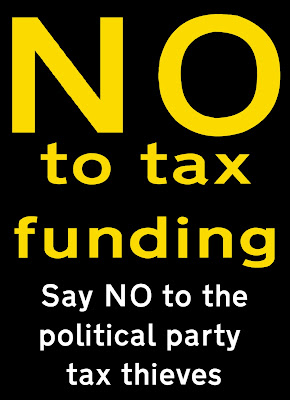 Raedwald notes that the Lib-dims have already seized upon the Cruddas affair as further justification for tax funding of political parties – or their "private little club". He is calling for a "no" campaign, and has produced his own banner (left).

Coincidentally, Simon Jenkins is calling the affair "a deep offence against democracy", arguing that Cameron and Osborne must have been aware of what was going on – even if they were not privy to Cruddas's earthy style.

I don't think he has the measure of the beast. These vile people employ what is known as "constructive ignorance". They go out of their way not to know what is happening, studiously avoiding anything which might suggest that they have any prior knowledge of events.

This, of course, is the handmaiden to "plausible deniability", a long-known concept, although the phrasing is relatively recent, attributed to Central Intelligence Agency (CIA) director Allen Dulles in 1961 – over keeping back details of a plot to kill Castro.

Our response needs to be along the line of Jenkins, but not so much arguing that they must have known, so much as they should have known. Senior management should always make it their business to find out what their subordinates are doing.

But Jenkins also sees another agenda – as picked up by Raedwald. The casualness of the political parties, all of which have had mishaps with dodgy donors, he says, suggests a continued desire to play fast and loose with ethics in the hope of forcing public opinion to replace private donors with state aid.

We rather hope, though, that public opinion is more robust. These people are already thieves, ones who have cloaked their actions in the spurious legitimacy of the law. To allow them more larceny, this time more directly to line their own pockets, is intolerable.

My guess though, is that the contempt for the electorate is now so embedded in the system that, one way and another, these thieves are going to push this through regardless. And that will be an even greater offence against democracy.

COMMENT: "TORIES FOR SALE" THREAD
Posted by Richard at 09:48