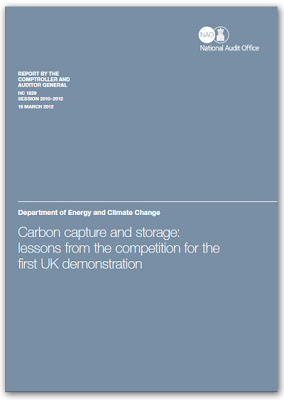 A total of £64 million was wasted by the Department of Energy and Climate Change (DECC) in its abortive attempt to get built a demonstration carbon-capture and storage (CCS) plant up and running.

The competition, says the National Audit Office (NAO) in its latest report (pictured right), was launched in 2007 with insufficient planning and recognition of the commercial risks.

Four companies were invited to compete for funds but, by last year, there was only one left, Iberdrola SA (IBE). Developers including BP Plc and EON had shelved their projects. Then, in October, the final bid was scrapped in as Iberdrola was unable to build its proposed Scottish plant within the budget or agree to the contract terms.

"In the context of value for money, developing new technologies is an inherently risky undertaking. Taking calculated risks is perfectly acceptable if those risks are managed effectively; but in this case DECC, and its predecessor, took too long to get to grips with the significant technical, commercial and regulatory risks involved", the NAO adds.

But no one has been fired. No one has resigned. No one has lost so much as a ha'penny from their pensions. All we get from the NAO is the weak-as-dishwater comment that DECC "must learn from the failure of this project".

Actually, by comparison with the Ministry of Defence – which wasted more than £100 million on the Vector project alone, this is small beer. And, at least on this project, no one died. Furthermore, if the project had gone ahead, with a budget of £1 billion, so we would have lost much more. In a sense, we (the taxpayers) have got off lightly.

But this is not the end of it. Unfortunately, it is not only DECC which is incompetent. The NAO is as well. Gulled by the propaganda, it has failed to look into the technicalities of the contract and appreciate that CCS is not technically feasible. Thus, it has not understood that the real reason why the £1 billion contract did not go ahead was because it could not work.

All the NAO does, therefore, is bitch that "Four years down the road, commercial scale carbon capture and storage technology has still to be developed". It is now standing aside as DECC prepares to make another bid to become a major-league money waster alongside the MoD.

Then, what can you expect from Mr Amyas Morse, head of the National Audit Office. Paid a miserable salary of £210,000 per annum, the poor man is so close to the breadline that he obviously cannot do better, preoccupied as he is with working out how to make ends meet.

But, if this £64 million had been his money, and it had been the very last £64 million he had, would he have been so relaxed? Would our MPs, who so glibly approved this lunatic scheme have been so keen on it, had the funding come from their own pockets?

And there we have it. As long as these mad, reckless creatures can raid our pockets, and the supposedly independent auditor stands by and does little but whinge about the detail, and as long as there are no personal consequences for grand theft, it will continue.

This is your government. For sure, it has not killed anyone this time – for which we should be grateful. But it is still robbing us blind.