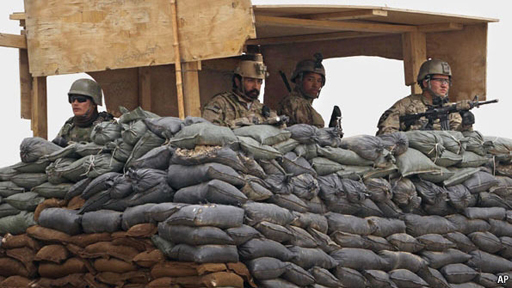 It was on 17 August 2009 that I finally concluded that the mission on Afghanistan was doomed, and that the only sensible option was to bring our troops home. At the time, we had suffered 200 casualties, with The Guardian describing our adventure as "Mission Impossible". And you didn't have to be there, or have been there, to work it out.

But Ben Anderson has been there, and has come to the same conclusion. He could have stayed at home, although he would not then have been a "respected" journalist and documentary-maker. The Economist has stayed at home, however, and it effectively reaches that conclusion as well. Furthermore, it has joined just about everybody else in drawing the obvious conclusion, whether "respected" or not.

Only two people on this planet seem unable to see it: the terrible twins (in suits this time). They want to make out that the expedition has achieved something, and can be drawn to a coherent end – thus elevating self-delusion to new heights.

I suppose we are in new territory here, when these two so-called leaders are on a completely different planet. They can't in fact be called "leaders" as they are just pathetic creatures trapped in a make-believe world which dictates that they should go on pretending they are achieving something, because to say otherwise would be to admit failure.

That's what this is really all about – two macho morons who can't admit to themselves that they are doing the wrong things, and cut their losses. And for that, men must die and fortunes must be spent. "Mad" doesn't even get close.