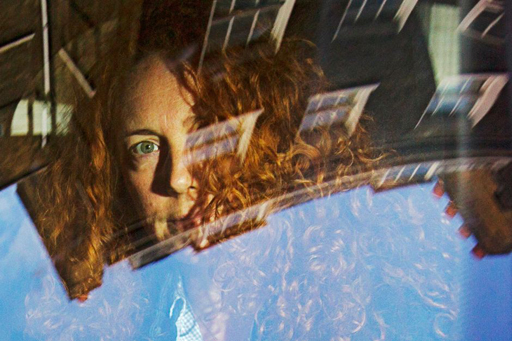 One of the issues which has dominated the media over the last few months (or is it years) is the "hackgate" drama and particularly the carryings-on of the ghastly Rebekah Brooks and the staff of News International. I thus keep wondering whether we should be covering it here.

What catches the eye at the moment, though, is the headline that Brooks, answering police bail today is to be questioned over payments to MoD officials. This, one might have thought, gets us into areas of national security, and starts getting serious.

Thus, we are endebted to the Belfast Telegraph which tells us nothing new, but puts it exceedingly succinctly, referring to the evidence of Sue Akers, the Met's Deputy Assistant Commissioner, to the Leveson Inquiry.

The evidence was, Akers suggested, that The Sun had been running a "network of corrupted officials" across the police, government, defence, military and health service, with inducements being offered running to tens of thousands of pounds.

But what we needed to know was that the information they elicited appeared mostly to be "salacious gossip" rather than stories of genuine public interest. Furthermore, the journalists making payments appeared to know they were illegal, stressing the need for "care" and "cash payments".

This, when you think about it, has to be about right, even when it comes to the MoD. There have been very few times when The Sun has offered anything of serious interest on defence issues and is most famous for getting things egregiously (and sometimes deliberately) wrong. You wonder why they bother paying for the trash they actually do print.

This brings to light a much broader issue than the one that Levereson seems to be considering, the extent to which journalists should ensure that their work is accurate, and the degree to which they should check their material when it comes from apparently reliable sources. 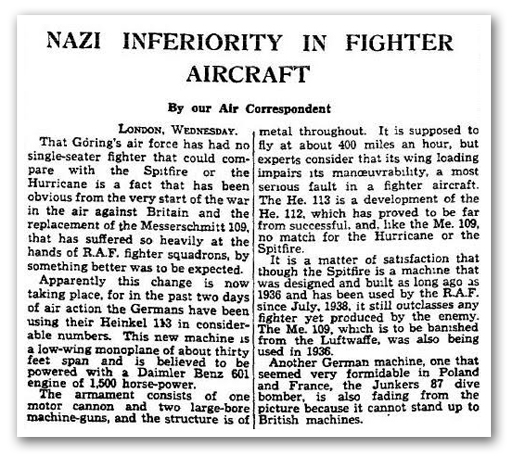 Obviously, there are limits, as from this example from The Guardian on 19 August 1940 (reproduced above), which informs its readers of the emergence of a new Nazi fighter, completely unaware that its Heinkel 113 simply does not exist.

But one must nevertheless admire the patronising certainty with which the "Air Correspondent" reels off spurious detail from what is in fact a Nazi spoof, and it is such wonderful fun to remind ourselves of how reliable this newspaper is and how little we can rely on the paper's use of "experts" who attest to certain characteristics of this non-existent aeroplane.

Then, of course, the media was not in contol and could not do any fact checking – so it is a little unfair to criticise (not that this stops me). Now, though,it seems that the media isn't actually interested in the facts at all – just "salacious gossip".

If that is the case, then the Leveson Inquiry is not for us. Let the media wallow in its mire. We can go elsewhere for our facts.