A gallant but futile effort 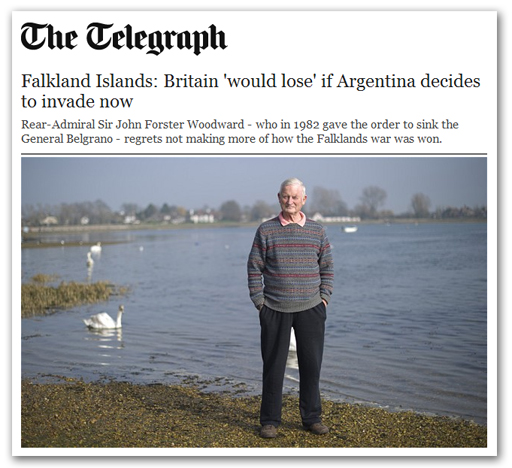 "That was stupid", says Sandy Woodward – former task force commander who took the expeditionary force to rescue the Falklands in 1982.

This plain-speaking man of the sea says it was a mistake not to have made more noise, "to make sure people realised it was the Navy that had done the job, not the bloody Air Force or the Army". The Air Force, he adds, "dropped one bomb on target. There were more Commandos, who are naval soldiers, than there were Army".

Now, Woodward is into selling his book – and best of luck to him – but he is also supporting the service from which he has retired, indulging in the special pleading that typifies inter-service rivalry.

Characteristically, to do so he is relying on a myth - in this instance the "myth" that the Royal Navy saved the Falklands. This possibly qualifies as a "true myth", but whether it does or not, he relies on its power to support his case that, in order to continue protecting the Falklands, we still need a powerful navy.

The beauty of this is that it illustrates the archetypal myth, and how it is used. Specifically, myths are narratives (true or false) about events past, presented in such a way as to shape our thinking, how we react to current events and thence how we behave.

Woodward, in fact, is demonstrating one of the primary functions of the myth, that of supporting one faction in competition for funding between departments of state or, as in this case, within departments such as the three military services in the MoD.

This is a perennial feature of government, as much in the past as it is currently. And it was for precisely this purpose that one of the most significant Battle of Britain myths was developed and deployed – not in 1940 but in 1945.


What you see from the cutting above is a scene-setter (the exact timing is not important) which tells us that, in the immediate aftermath of the Second World War, demobilisation is taking place and the armed forces are being cut back to a fraction of their former strength. It also has Churchill, now leader of the opposition, calling for the RAF to be "maintained on a very large scale".

Needless to say, the military establishment was extremely concerned that the process of downsizing might go to far, and the RAF had already been seeing plans for its fleet size to be slashed. Thus, for the anniversary of the Battle of Britain on 15 September 1946, we see – for the first time - a detailed claim that Britain was "in a bad way" during the Britain, short of aircraft and pilots, to the extent that the battle was a "close call".

The interesting thing is that this is not the invention of the media, or a revisionist historian, but is an official statement from the Air Ministry, delivered with such impeccable timing that it gets published worldwide (these pieces from the Australian press).

Yet, from a review of the contemporary records, we learn that there were no shortages which in any way prejudiced operations. Churchill had in fact visited 11 Group HQ, at the heart of the air battle on 31 August, and had on 2 September reviewed progress at a secret War Cabinet meeting. "We had every right to be satisfied,” he said, "our own Air Force was stronger than ever and there was every reason to be optimistic about the 1940 Air Battle of Britain".


As regards the aircraft supply, the situation was tight in August 1940. Peter J. Dye in the Air Force Journal of Logistics for the winter of 2000, records that against a total wastage of 594 Hurricanes and Spitfires, new production and repair could provide only 527 aircraft.

The difference, however, was made up from the immediate reserve stocks and, by September the position had been returned to a positive balance of some 50 aircraft on the month. In October, after three months of steady attrition, Fighter Command's front line stood at some 98 percent of its established strength, slightly higher than when the battle of Britain opened.


Nevertheless, some versions of the myth are relatively harmless, where the intent was merely to remind the politicians and the public of the danger of running down the air force. What are more insidious are those that have a political dimension, affecting the way we relate to the political classes. Such is the Battle of Britain "invasion myth" which limits the battle to that one phase, ignoring the strategic objectives of the Blitz. By this means, it  has the British people relying on the RAF for their salvation, rather than on their own resources and fortitude.

Debunking the political myths is now more important than it has ever been - as Britain is once again under existential threat. And that was the task I set myself in The Many Not The Few. Worryingly though, Duff and Nonsense is suggesting that the book should be filed under the category "Gallant but Futile Effort" – not for any pejorative reason, but simply reflecting the size of the task I have set myself (and my likelihood of success).

However, if I acknowledged that my labours were futile (whether gallant or not), I would give up now. That, I cannot do because the myths of the past are still current, framing the population as passive dependants, who need to rely on their political and technocratic élites to guide them through the crises of life.

The "true myth" though, is that there is no crisis so bad that our politicians cannot make it worse and that, in times of crises, there is only one set of people on which we can rely – ourselves. To pursue that line may be futile, but we simply cannot afford to abandon what is probably our only hope of salvation.

COMMENT: "MAKING OF A MYTH" THREAD
Posted by Richard at 00:02