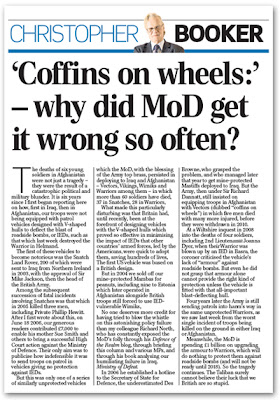 Having taken such a very great interest in the Snatch Land Rover saga, right from the very beginning, with an article in his column on 18 June 2006, it is hardly surprising that Booker should revisit the issue of inadequate armoured vehicles in this week's column.

In fact, those six years ago, I held off publishing on this blog until that date, in order to come out the same time, and thus Booker and I worked together on the issue, seeking improvements in equipment which would save lives.

Of course, measured against the scale of events which afflict so many, the recent deaths of six soldiers in Afghanistan was a relatively minor event. Even as I write, the deaths of 50 people have been confirmed following an avalanche of snow, ice and mud "which buried the village in a disaster-prone area of northeastern Afghanistan where Mother Nature is a bigger enemy than the Taliban".

As far as we are concerned, though, the emphasis on the six does not suggest that their lives are worth any more than the fifty unnamed victims of avalanche. Rather, it reflects the fact that we, as a nation, have a special responsibility to our military.

Whether we agree or not with what they are ordered to do, they put their lives at risk in our name and we therefore must do whatever we can to reduce their risks, in whatever way we can. Booker and I, with column, blog, contacts and the support of readers, can do more than most – but that simply means that our responsibility is greater.

And, as Booker writes in his column, the deaths of six young soldiers in Afghanistan were not just a tragedy – they were the result of a catastrophic political and military blunder.

He himself reminds us that it is six years since he first began reporting on how, first in Iraq, then in Afghanistan, our troops were not being equipped with patrol vehicles designed with V-shaped hulls to deflect the blast of roadside bombs, or IEDs, such as that which last week destroyed the Warrior in Helmand.

The first of these vehicles to become notorious was the Snatch Land Rover, 200 of which were sent to Iraq from Northern Ireland in 2003, with the approval of Sir Mike Jackson, then the head of the British Army.

Among the subsequent succession of fatal incidents involving Snatches was that which in 2005 killed three men, including Private Phillip Hewett. After Booker first wrote about this, on June 18 2006, our generous readers contributed £7,000 to enable his mother Sue Smith and others to bring a successful High Court action against the Ministry of Defence. Their only aim was to publicise how indefensible it was to send troops on patrol in vehicles giving no protection against IEDs.

But this was only one of a series of similarly unprotected vehicles which the MoD, with the blessing of the Army top brass, persisted in deploying to Iraq and Afghanistan – Vectors, Vikings, Wimiks and Warriors among them – in which more than 60 soldiers have died, 37 in Snatches, 28 in Warriors.

What made this particularly disturbing was that Britain had, until recently, been at the forefront of designing vehicles with the V-shaped hulls which proved so effective in minimising the impact of IEDs that other countries' armed forces, led by the Americans, were quick to adopt them, saving hundreds of lives. The first US-built vehicle was based on a British design. 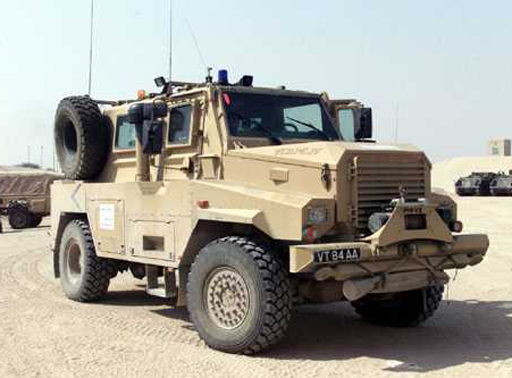 That British design was the Tempest (pictured above) which replaced our mine-protected Mambas which in 2004 we had sold off for peanuts, including nine to Estonia which later operated in Afghanistan alongside British troops still forced to use IED-vulnerable Wimiks.

Bizarrely, in terms of mine protection technology, we were once the world leaders but since have gone backwards, inexplicably surrendering our lead, first to Rhodesia, then South Africa and then the United States, from which we currently buy the vehicles on which the Mastiff and Ridgeback are based.

But what Booker reveals is that, in 2006, we were far from alone in our determination to bring better equipment to our troops. We managed to establish a hotline to the then Secretary of State for Defence, the much-underestimated Des Browne.

It was he, not the military, who grasped the problem, and who managed later that year to get mine-protected Mastiffs deployed to Iraq. But the Army, then under Sir Richard Dannatt, still insisted on equipping troops in Afghanistan with Vectors (dubbed "coffins on wheels") in which five men died with many more injured, before they were withdrawn in 2010.

Part of our problem, though, remains well-meaning but basically ignorant coroners. For instance, at a Wiltshire inquest in 2008 into the deaths of four soldiers, including 2nd Lieutenant Joanna Dyer, when their Warrior was blown up by an IED in Basra, the coroner criticised the vehicle's lack of "armour" against roadside bombs. But even he did not grasp that armour alone cannot provide the right kind of protection unless the vehicle is fitted with that all-important blast-deflecting hull.

Four years later the Army is still sending patrols into harm's way in the same unprotected Warriors, as we saw last week from the worst single incident of troops being killed on the ground in either Iraq or Afghanistan.

Meanwhile, the MoD is spending £1 billion on upgrading the armour to Warriors, which will do nothing to protect them against roadside bombs (and will not be ready until 2018). So the tragedy continues. The Taliban, says Booker, surely cannot believe their luck that we British are so stupid.

The worst of it though is that it is probably not stupidity but something much worse. And that is why, after all these years, this issue is as important now as it was when we first started writing about it. No lessons have been learned and, given a chance, the Army will dispense once again with mine protected vehicles, leaving troops once again to die.

This sadly, is an ongoing battle – against our own Ministry of Defeat, the greatest enemy of us all.