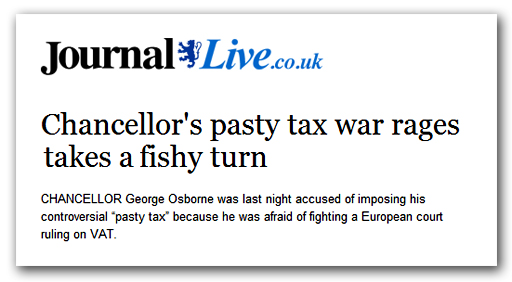 What the nationals fear to reveal, the Northern Journal makes its front page. Readers will recognise some of the content, but what is also fascinating is the obligatory comment from HMRC. It counters that "the UK has a specific exception from the zero rate for hot takeway food, and that would continue to apply". Thereby, the Treasury insists that "the decision to apply VAT to all hot foods is there to remove anomalies and not to see off an EU challenge".

These bizarre comments are almost mind-blowing. The UK does not have a "specific exemption" on the zero rate for hot takeway food. It has a derogation written into the VAT Sixth Directive which allows it to apply a zero rate to food. But it is free waive that derogation in respect of any categories of food, which is exactly what it has done with hot food.

However, what it is not free to do under the Directive, is apply a discriminatory rate, levying VAT on some hot foods and not others – or different rates on the same types of food. Thus, when the ECJ decided that the sale of hot food over the counter was the supply of goods rather than a service, HMRC was in trouble.

Up until then, it had been relying on the sale of hot foods from outlets such as ethnic takeaways and fish and chip shops being categorised as a service, attracting VAT on that account. When the ECJ decided that this was the supply of food, such outlets should have been able to apply the zero rate, but for the fallback position, where HMRC has waived its derogation for hot food and could apply VAT on this category.

But that in turn exposed a glaring anomaly in the British government's position. It is now charging VAT on hot foods rather than the service of supplying hot foods, but it is applying that tax to some foods and not others. This it is not allowed to do under EU law, so Osborne must regularise the position.

Thus to say that "the decision to apply VAT to all hot foods is there to remove anomalies and not to see off an EU challenge" is utterly bizarre. The point is that, unless the anomaly is removed, there will be an EU challenge. And, since the chancellor does not want to lose the income from takeaway shops, he is imposing the standard rate on all hot foods.

Needless to say, Osborne does not want to be seen as the weak man that he is, bending his knee to Brussels on an unpopular issue, so the Treasury is now laying down a smokscreen, which is getting close to outright lying. But at least one newspaper is seeing the light.