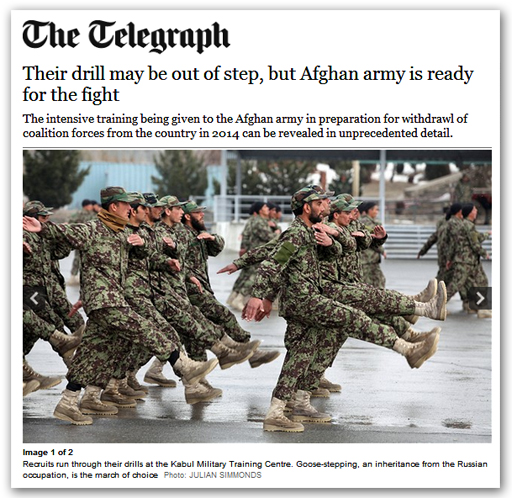 Almost calculated to make me eat my words after writing my last post, we happen upon a piece of propaganda by defence correspondent Sean Rayment in The Sunday Telegraph so inept, that one can only applaud the run of caustic comments.

Rayment bizarrely optimistic article about the Afghan National Army (ANA) thus attracts the comment from "ste045": "Was this article written by Army's PR corps, a larger dollop of wishful thinking I've yet to read".

From "anythinggoeshere", we get the view: "I doubt the raw Afghan military will have the competency or self confidence to be aggressive enough, they will probably adopt a bunker mentality", while "Carolus Campanus" tells us: "This piece is so wonderfully retarded that I may keep it so that I can have something to chuckle over when the Taleban take power".

Rayment actually claims the goose-stepping drill comes from the Soviet occupation, but "mackinlay" corrects him, saying that it "comes not from the Soviets, but, the German and Swedish mercenaries from the 1880s brought in to modernise the army". The current form of drill used, he says, "is straight out of the Swedish Army of the 1920s, with a Swedish military mission in the country from then to the 1950s".

This will not be the first time Rayment will have been wrong. While in June 2006, Booker was complaining about Snatch Land Rovers and calling for mine protected vehicles in Iraq, Rayment was extolling the virtues of the Warrior.

For good reason then we have "MarcosPerez47" complain that: "The Telegraph has become a propagandist comic book even its most loyal readers can no longer swallow". Echoing this is "Fedupofallthis", who asks, "Is this article propaganda or tripe or maybe both? ", then adding: "Whatever it is, I am not swallowing it".

And then there is "tinkerbell23", who says: "From your headline: '...can be revealed in unprecidented detail' … The subbing at the Telegraph is getting very bad now. It's getting to the point where there is not a single article on the web site version that does not have either an awful spelling error …".

That error has been corrected now, but we still have "withdrawl", the second error, so far undetected. "More and more people read this paper on the web. If the web version is full of errors then it ruins that experience. Eventually, I'll stop reading it", says "tinkerbell23".

Behind the scenes though, we hear that the sub numbers have been slashed, leaving the staff quite unable to cope. And as always, it is the sharp end that suffers, although the paper still seems to have enough money to send Rayment to Kabul to pick up on the propaganda.

The clue here is that it is essential for the Cleggerons to project that the ANA is capable of taking the load, thus legitimising the withdrawal. And if Cameron needs the ANA to step up to the plate, Rayment will obligingly tell him it is "ready for the fight".

Actually, when I think about it, this time comments were relatively restrained.