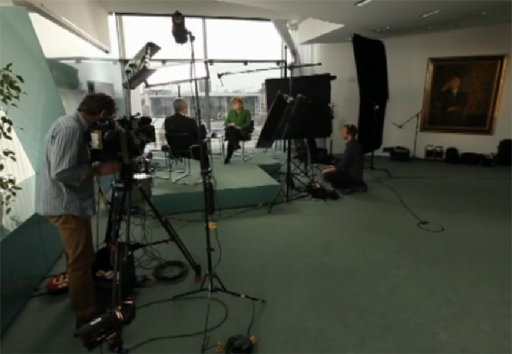 The BBC pulled off something of a coup yesterday, having Angela Merkel interviewed on Newsnight. Recording the event, the Reuters agency has her saying it would be a huge political mistake if Greece was allowed to leave the euro, saying that Germany would do all it could to keep the eurozone together.

The eurozone would be "incredibly weakened" by a Greek exit, she says. "People all over the world would ask: 'Who will be next?'" She then goes on to say:


It [Greece] has major weaknesses but it is trying to overcome them, be they in the administration or the competitiveness of their business community. It is going to be a long and arduous road.

We have taken the decision to be in a currency union. This is not only a monetary decision, it is a political one. It would be catastrophic if we were to say to one of those who have decided to be with us: 'We no longer want you'.

It would be a huge political mistake to allow Greece to leave. That is why we will be clear with Greece, we will say: 'If you want to be part of a common currency you have to do your homework but at the same time we will always support you.'

This is somewhat different tack from what her colleagues were saying only a few weeks ago, but the nuances are all-important. Reuters headlines: "Merkel - Greek euro exit would be 'catastrophic'", but that is not what the German chancellor is saying.

This is not only a monetary decision, she is saying. It is a political one. It would be a huge political mistake to allow Greece to leave - a political catastrophe. And that is why we are headed for disaster. These are economic issues and the need economic solutions – but the driver is political, specifically the politics of European integration.

This is what we have been saying all along, and this is what makes the crisis so difficult to read for the financial wonks. This is not finance, it is politics. This is why the issue cannot be resolved. The train wreck goes on.