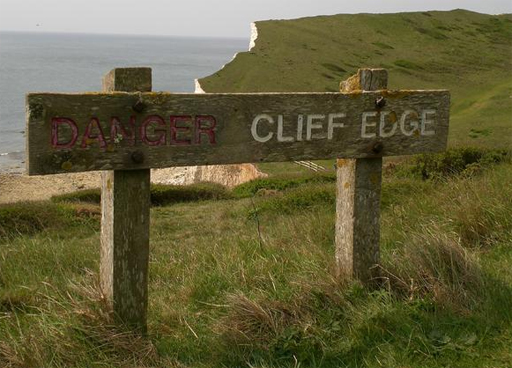 Well, the "colleagues" are not to be denied their crises, with another one set up for this week. This is, according to The Financial Times and other media sources, Greece on another cliff edge – if a country can be said to be thus poised.

With weary constancy, we are told it faces yet another "decisive week" in its struggle to avert a sovereign default – this time the "planned debt swap". The FT has it poised not on a cliff edge but a knife-edge – which, in terms of helpful clichés, means much the same thing. I suppose it is even possible that one could be poised on a knife edge as one falls over the edge of a cliff.

The proximate cause of this current crisis is "doubts" over the level of participation by private bondholders. At least 75 percent must "volunteer" to partake in a form of ritual slaughter known as the "Collective Action Clauses" (CACs), where private holders of €206 billion in Greek bonds have until Thursday evening to decide whether to take part in a swap.

The word "swap", of course, is another of those clichés – and may also be a euphemism. It requires the bonds to be traded for a package of bonds and cash that will knock about €100 billion off Athens' debts. This is known as a "haircut", even though the scissors are applied somewhat below the neckline - more like Shylock territory really, only think kilogrammes (plural).

The 75 percent figure was one which was inserted retrospectively into the bond conditions, but the "drop dead" figure is 66 percent. If less than that number participates, the CACs become invalid … end of deal and civilisation as we know it, not with a whimper but a CAC (failed).

However, in an "cliché-rich environment", we have been marched to the top of the hill and down again so many times that one just knows that we are going for yet another long march. The investors will run it to the edge and then cave in. After all, what is €100 billion between friends, when the end of the world is at stake?

The last word, though, must go to an "insider" who says, "we are going to be flying blind for a few days". A piece of cake, as they say, to use up another from our inexhaustible stock of clichés.

No cliché has been harmed in the writing of this post.