A question of accountability 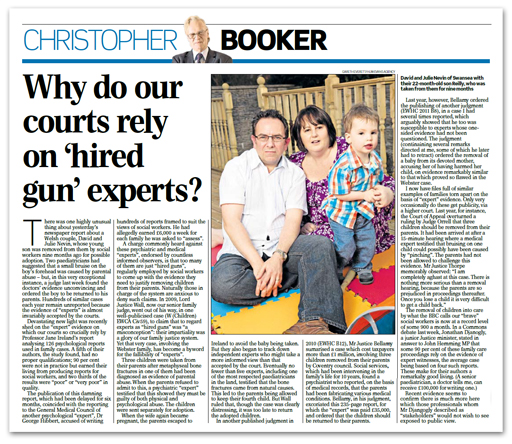 For two consecutive weeks, the Booker column (above – click to enlarge) has raised issues about so-called "experts" in the employ of social services, used in the "stolen children" racket.

As with last week, Booker has also been able to refer to work by The Daily Mail, adding strength, if not depth to his long-running campaign to redress the failings of the family courts system.

The Mail, in typical fashion, churns out high volume stream of consciousness material, with very little focus, not really focusing on the causes of the evil it records, leaving Booker to widen out the story and bring more to the table. He thus is able to reinforce the point that expert witnessing has become a highly lucrative cottage industry, making the "experts" a powerful constituency in support of the status quo.

What has yet to come over, although it will be addressed by Booker in future columns is that, whatever the venality of the "experts" that give evidence, their failings are entirely the responsibility of the court.

It is a little known fact about experts that, formally, they are officers of the court, and serve the court as a whole, not any particular party. This requirement is honoured more in the breach than the practice, but it still is the case that witnesses can only enjoy the privileges of experts with the assent of the courts.

As such, a judge can chose, on the basis of a challenge or on his own volition, to reject the credentials of putative experts, and refuse to allow them to testify.

Thus, where we see – as we did last week – many of the so-called experts being either unqualified, or not practising, it is up to the individual judges to take action. And for that they allow, they should take responsibility – not that any ever do.

Presiding over the dung heap, though, is the justice ministry, which has the power to propose legislation to regulate the expert witness industry, if the judges fail – which they are doing rather consistently.

And here, it would appear that there is such a need, when we learn that Jonathan Djanogly, a junior Justice minister, stated in answer to John Hemming MP that some 90 percent of these family care proceedings rely on the evidence of expert witnesses, the average case being based on four such reports.

At 900 cases a month, that is over 3,000 reports a month, at up to £100,000 a hit. Funded entirely by public money, this is hundreds of millions a year, the tip of the ice-berg of the billion-pound child-snatching industry.

Even without the case for better justice for parents and children, therefore, there is a powerful need to see better value for money, and far more accountability over its spending.

This is where The Guardian goes off the rails. Having pitched in last Wednesday to defend its client readership, the social workers, it completely misses the point, complaining about the amount of hostile publicity the social workers are attracting.

But, in this devastating saga of incompetence, all that is left now is the searchlight of publicity and a robust media. Yet The Guardian, in complaining about this, does not in any way address the issues which give rise to so many hostile comments, many arising from individuals who have been bruised by the system.

This paper needs to realise that the criticism is not an attack on the social workers, per se, as much as on a dysfunctional system. Without checks and effective external oversight and regulation, any bureaucratic system will degrade over time. And where officials are awarded great power, it is inevitable that some well misuse it.

What is wrong here, then, is the regulatory system – in the first instance the courts and then, as the long-stop, ministers and parliament. All have their roles in ensuring that the system works efficiently and fairly in the best interests of all concerned – and that the broader societal interest in maintained. All are failing.

Those failures are the real scandal - the inadequacies of the courts and the politicians. That is where the searchlights should be shining brightest. And that is what Booker is trying to do.