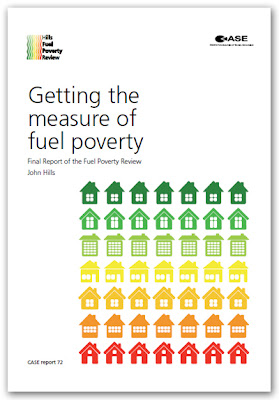 For once, one can have a little bit of sympathy for the MSM hacks, today being confronted with the Hills Report on fuel poverty. Running to 237 pages including covers, the dense prose defies easy analysis. Thus the temptation to rely on the Reuters report must be overwhelming.

From this source, the headline is that up to three million British households will be in fuel poverty in 2016, "showing that UK's goal of eradicating fuel poverty by then could be at risk".

The primary source though is Professor John Hills, director of the Centre for the Analysis of Social Exclusion at the LSE. But examination of his website reveals multiple sets of figures, which don't always seem to match the Reuters offering.

These households faced costs to keep warm that added up to £1.1 billion more than middle or higher income people with typical costs. This is defined as the "fuel poverty gap". It is already three-quarters higher than in 2003 and will rise by a further half, to £1.7 billion by 2016.

This means, according to Hills, that fuel poor households will face costs nearly £600 a year higher on average than better-off households with typical costs.

However, while the message being conveyed by the media is about the potential increase in fuel poverty, that isn't what the report is really about, as Reuters actually acknowledges.

What seems mainly to concern Hills, though, is that the current definition of fuel poverty misses out people who are fuel poor, while catching some people who aren't. He wants the definition to change and for there to be a new way of measuring fuel poverty. The end result is a new category of people known as the LIHCs – i.e., those with Low Incomes and High Costs.

Fortuitously, one might say, this has the effect of bringing down the number of households affected by what was once known as fuel poverty from around four million to the 2.7 million cited. This is the figure Hill has retrospectively calculated, using the new measure.

Using this new LHIC indicator and the "fuel poverty gap", we are told, the government can get a better "focus" on the scale of the problem, and the progress in tackling it. Thus armed, Hills suggests that the government – not just DECC but also other Departments – can then set out a renewed and ambitious strategy for tackling fuel poverty. This renewed and ambitious strategy should then reflect the challenges laid out by the Hills report.

And that's it. Actually, it is not quite it. By the time you get past the summary of recommendations, you still have 210 pages of report to read.

That shows that the best way to deal with fuel poverty is, rather conveniently, to improve the housing of those at risk, giving the plebs better insulation. That, we are told, is the most cost-effective way of tackling the problem, cutting energy waste, with large long-term benefits to society as a whole.

Even more conveniently, it seems, that exactly meshes with government policy. This is the way round increased costs of fuel and all those embarrassing issues such as subsidies to wind farms. All you have to do is improve insulation.